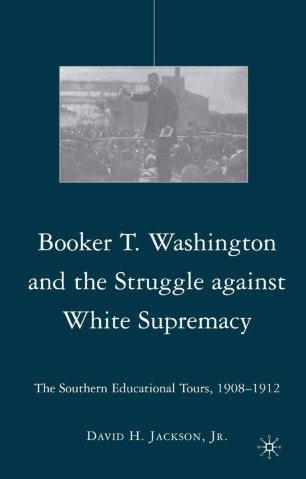 Booker T. Washington and the Struggle against White Supremacy

This book narrates and analyzes the southern tours that Booker T. Washington and his associates undertook in 1908-1912, relating them to Washington's racial philosophy and its impact on the various parts of black society.

DAVIS JACKSON is a Professor of History at Florida A&M University, USA.

'This interesting book outlines the context for and conditions of Booker T. Washington's well-publicized but little-analyzed tours of Mississippi (1908), Tennessee (1909), North Carolina (1910), Texas (1911), and Florida (1912). Jackson has done good research, drawing heavily from Washington's papers, newspaper accounts, and synopses of the tours from the Tuskegee Student. A nice contribution to our understanding of Washington, certainly one of the more complex figures in black history.' The Journal of Southern History

"It offers one valuable insight that seems to have eluded other biographers. They dismiss the mask Washington wore - the amiable exterior that hid his true thoughts and feelings - as a personal idiosyncrasy. Jackson recognizes it as a social device frequently employed by Southern blacks. The available strategies were not limited to 'protest' or 'accommodation,' Jackson writes. There was a third alternative, namely 'manipulation,' and that was Washington's way." - First Things: A Monthly Journal of Religion and Public Life

"Jackson's research is exhaustive and his work is to be commended both for its moment-to-moment re-creation of Washington and his party's activities and for its lively style, reflecting the author's enthusiasm for his subject." - The Journal of American History

"Drawing on both primary and secondary sources, David H. Jackson has made an original contribution that illuminates a seldom-mentioned period in Booker T. Washington's career: the southern tours he and his associates undertook from 1908 to 1912. Jackson analyzes the significance of these tours in terms of early twentieth century race relations, and relates them to Washington's racial philosophy and its impact on the Negro masses and the black elite-class. This important book will be of interest to both scholars and nonspecialists." - Bobby Lovett, Professor of History, Tennessee State University

"This book is additional evidence of Washington's wizardry and the importance of his movement, which were both rooted more in the modernity of African American progress than all too many critics have yet to acknowledge and concede." - Maceo Dailey, University of Texas, El Paso

"[This book] signals a welcome revival of interest in Washington, adding nuance, context and argument based on a corpus of works published since the appearance of Harlan and Meier's pathbreaking work. They deserve wide readership and will stimulate debate." - J.D. Smith, Choice