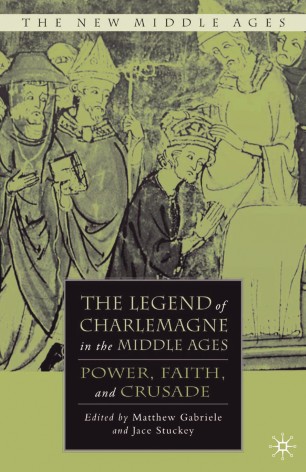 The Legend of Charlemagne in the Middle Ages

These essays take advantage of a new, exciting trend towards interdisciplinary research on the Charlemagne legend. Written by historians, art historians, and literary scholars, these essays focus on the multifaceted ways the Charlemagne legend functioned in the Middle Ages and how central the shared (if nonetheless fictional) memory of the great Frankish ruler was to the medieval West. A gateway to new research on memory, crusading, apocalyptic expectation, Carolingian historiography, and medieval kingship, the contributors demonstrate the fuzzy line separating "fact" and "fiction" in the Middle Ages.

"It is pleasing to see the publication of a collection of eight fairly short essays edited by young scholars whose aim is to discuss representations of Charlemagne found in medieval art and in the historical and literary documents produced during the centuries immediately following his death . . .the legend of Charlemagne analysed in these studies affords us rich insights into the mentalités of the Middle Ages . . .the literary scholar will gain much from the interesting analyses of the historical documentary evidence." - Speculum

"This collection really is marvelous. The Legend of Charlemagne in the Middle Ages is an unusually coherent and useful collection. The articles speak to and build on each other in ways one rarely finds. Best of all, they teach you something you hadn t realized and make you wonder how you could ever have thought you knew the Middle Ages without it." - Geoffrey Koziol, Professor of History, University of California, Berkeley

"Like Bill Clinton s, Charlemagne s reputation was tarnished at the end of his reign by allegations of moral impropriety, but was quickly rehabilitated in part because of his successor s stumbles. It was fully recuperated in ways that idealized the Frankish king and emperor as the paradigm of governance, the prototypal Crusader who had re-conquered Spain from Moslem marauders, the steward of salvation, a pilgrim (though he never went to the East as later texts had him do), and the preserver of relics. Through a close reading of the medieval accounts and analysis of artistic representations, the essays in this volume trace the emergence of these several different Charlemagnes. In so doing, they demonstrate how successive contemporary needs, far more than historical facts, determined the image of the great ruler that emerged during course of the Middle Ages." - Herbert Kessler, Professor of the History of Art, Johns Hopkins University