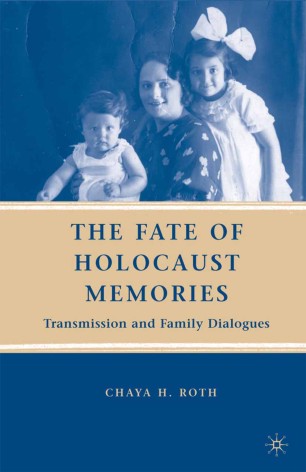 The Fate of Holocaust Memories

An innovative mix of history and psychological research, this book tells the story of one family of Holocaust survivors and reveals how each generation has passed on memories of the War and the Shoah to the next.

CHAYA ROTH is a Visiting Clinical Associate Professor of Psychiatry at the University of Illinois at Chicago, USA.

"One of the most moving and important books on the Holocaust I have read." - Sir Martin Gilbert, Historian"Chaya Roth has given us a wonderfully evocative and multi-layered book. A 'labor of love' in the truest sense of those words, it bravely portrays and probes the interaction of her family's past, present, and future over seven decades. I know of no work on the transmission of Holocaust memory to match it." - Peter Hayes, Theodore Z. Weiss Professor of Holocaust Studies, Northwestern University"A remarkable achievement, Chaya Roth's The Fate of Holocaust Memories shows how family history is profoundly multi-dimensional, especially when that history must be retrieved from the ruins of the Holocaust. Originating in the author's childhood memories of that catastrophe, this significant book not only recovers and preserves a particular family's story but also brings Roth's mature insight to bear on the history of a disaster that we forget at our peril." - John K. Roth, author, Ethics During and After the Holocaust: In the Shadow of Birkenau"Chaya Roth's The Fate of Holocaust Memories: Transmission and Family Dialogues gives a new voice to not only the victims of the Holocaust but also to the succeeding generations of 'survivors.' While Roth ably tells a gripping story of survival in the words and recollections of her family, she provides the reader with much more. She helps us understand the process of memory creation, as both biological and psychological constructs in a method that artfully helps us understand the imperative to tell, re-tell, and understand what has happened and what formed the fabric of a family's character and psyche as it extends from generation to generation. Roth helps us appreciate that memories are important in terms of the precise and imprecise recollections of facts and feelings they portray, as well as the meanings of these memories as they are shared with others. Among the many revealing messages in this work is that the fear of forgetting is just as powerful as the fear of remembering because it is not just retention but also the sharing of memories that binds us together and, to the extent possible, can make us whole again." - Bennett L. Leventhal, Professor of Psychiatry and Director, Center for Child Mental Health and Developmental Neuroscience Institute for Juvenile Research, University of Illinois, Chicago"Chaya Roth s new book, The Fate of Holocaust Memories: Transmission and Family Dialogues, began with a promise she made when she was just 7 years old, a young survivor of the Holocaust. The book includes the voices of Roth s mother, Hannah Diller, and sister, Gitta Fajerstein-Walchirk - also survivors - who help tell their powerful story. Roth wrote the book not only to honor the memory of her family and remind people that Jews lived through the Holocaust, but also as a means to discover how to transmit the stories of the Holocaust, along with their ideals and values, on to the next generation." - Stefanie Pervos, JUF News