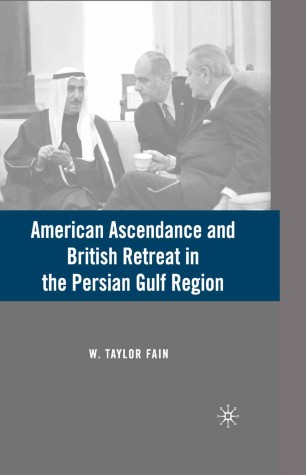 American Ascendance and British Retreat in the Persian Gulf Region

This book critically examines the origins of American diplomacy in the greater Persian Gulf region, arguing that it was the inability of the United States to contend effectively with the disintegration of British imperial authority in the Gulf that eventually led it to assume its current role in the region.

W. TAYLOR FAIN is an Assistant Professor of History at the University of North Carolina Wilmington, USA.

"Fain's book is . . . a welcome addition to the literature. His work is in many ways an impressive achievement, particularly in the ways that the author demonstrates control of an enormous body of primary source material as well as familiarity with most, if not all, of the secondary scholarship . . . Fain has made a significant contribution to our understanding of Anglo-American relations in the Persian Gulf, and his work will probably be mandatory reading for all scholars in this field." - The American Historical Review"In many ways an impressive book, being erudite, well written, and extensively researched . . . W. Taylor Fain has produced a significant book that will add to the growing literature on Anglo-American relations and the end of empire in the Persian Gulf." - International Journal of Middle East Studies"Encompassing two turbulent decades of Anglo-American cooperation and rivalry in the Persian Gulf region, W. Taylor Fain's well researched and briskly paced monograph ably fills a gap in the current historiography on western policy towards the Middle East during the Cold War." - Journal of Imperial and Commonwealth History

"Fain's study is a solid piece of scholarship. Moreover, Fain s use of every available secondary source and his command of the various archival sources is simply mind boggling. His study is very accessible, written in a clear academic fashion, and chronologically structured, which makes it a good choice for classroom use, particularly as it provides a broad perspective on the diplomatic relationship between the US and Britain in the Middle East. Overall, I found Fain's study of utmost importance to the field. It contributes to our understanding of the history of the region and the diplomatic relationship between the US and Britain and it convincingly portrays how the nature of this special relationship came to evolve over the middle decades of the twentieth century. Students and scholars interested in these topics will greatly benefit from his insights." - Insight Turkey

"W. Taylor Fain re-treads a period of history from 1951 to 1972 gradually piecing together the various processes by which Britain lost its traditional regional dominance in the Gulf, whilst carefully accounting for the origins of America s imperial endeavour in the Gulf today, which is broadly a continuation of the British role. Where Fain s work is a treasure for the reader is in the rich use of the primary source base that has been folded into the analysis, adding a deft touch of colour to the narrative which re-creates the history of this fascinating period in a way few texts have yet done." - e-International Relations

"American Ascendance and British Retreat in the Persian Gulf Region is a well-written and -researched account of Anglo-American policy in the Persian Gulf from the end of the Second World War until the British withdrawal from east of Suez. It is a tale of personalities and administrations engaged in confrontation as well as cooperation, spun against the backdrop of an ever-more strategically important region plagued by both age-old and newer post-colonial quarrels." - Michael A. Palmer, author of Guardians of the Gulf"This comprehensive and well-written book illuminates current issues without falling into the trap of present-mindedness, and it fills an important gap in the literature. Drawing on extensive archival sources and demonstrating a firm command of the secondary literature, Fain provides a clear account of policy-making in both the United States and Great Britain.His deep knowledge of both nations' policies enables him to present a nuanced account of the differences as well as the similarities in US and British policies toward the region."