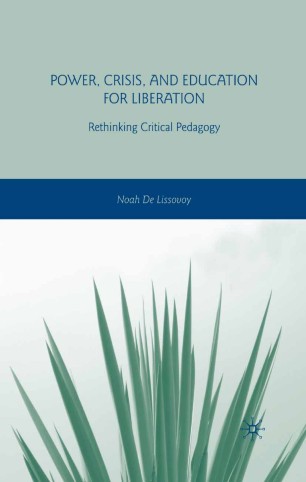 Power, Crisis, and Education for Liberation

Progressive educational approaches are currently in crisis in the face of globalization and conservative retrenchment. This book proposes a new framework for critical pedagogy that develops strategies for responding to the proceduralization of schooling and public life in general.

Noah De Lissovoy is Assistant Professor in the College of Education of the University of Texas at Austin, USA.

"Any viable notion of critical education has to consistently interrogate its most fundamental assumptions in light of a changing political, economic, and cultural landscape. This book represents not only the best of what critical education can offer, but also addresses the fundamental challenges and struggles that open up a future in which a real democracy seems possible. An insightful and provocative book that should be read by anyone who believes there is a relationship between education, justice, and democracy." - Henry A. Giroux, Global Television Network Chair and Professor of English and Cultural Studies, McMaster University

"Power, Crisis, and Education for Liberation challenges educators to courageously extend our analysis of culture, schooling, and power, by entering more willfully into the minefield of politics and economics.In so doing, De Lissovoy proposes an embodied pedagogy of opposition, grounded in both the realities of global capital and the particularities of everyday life. In the midst of today's growing despair, his message of possibility can invigorate our educational struggles against the ravages of neoliberalism and the blight left behind in its wake." - Antonia Darder, Professor of Educational Policy Studies, University of Illinois Urbana-Champaign

"A new generation of critical pedagogy scholars is asserting itself and De Lissovoy is leading the charge. This is a seminal book, as De Lissovoy examines emancipatory education in the ideologically charged conditions of the contemporary era with its novel demands and complications. De Lissovoy is necessary reading for all educators dedicated to social justice in these difficult times." - Joe L. Kincheloe, Canada Research Chair in Critical Pedagogy McGill University; Project Leader, The Paulo and Nita Freire International Project for Critical Pedagogy

"What makes De Lissovoy's contribution insightful and rich is his attempt to analyze the threats posed by specific tendencies of force in a global totality while rethinking categories of investigation and action central to critical pedagogy: historical time, the dialectic, oppression, difference and power, and praxis...A challenging but timely book not about critical pedagogy, but of critical pedagogy." - Book Smarts

"The ground covered in Power, Crisis, and Education for Liberation is ambitious in scope and warrants the full attention of critical pedagogues and others who accept the challenge of developing a new global language and subject of resistance." - Gregory N. Bourassa, Educational Studies

"The real insight of De Lissovoy's rethinking of the critical pedagogical tradition lies in his novel critique of oppressive schooling practices and his equally ingenious attempt to formulate a new method for thinking and acting against such oppression." - Tyson E. Lewis, Educational Philosophy and Theory Book Reviews