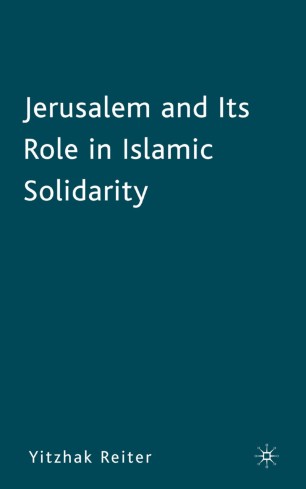 Jerusalem and Its Role in Islamic Solidarity

The book deals with the role of Jerusalem as a central religious-political symbol, and with the processes by which symbols of faith and sanctity are being employed in a political struggle. It examines the current Islamic ethos towards Jerusalem and the affinity between this religious ethos and the political aspirations of the Palestinians and other Arab and Islamic groups. It also compares current Jewish and Muslim narratives and processes of denial and de-legitimizing the affiliation of the other to the holy city and its sacred shrines and addresses the question whether religious outlook forms a major barrier for achieving peace in the Israeli-Arab arena.

"Yitzhak Reiter s Jerusalem and Its Role in Islamic Solidarity presents an enormously complicated and contentious topic with exemplary fairness and immense learning. Reiter correctly links the contemporary contest between Jews and Muslims with often diverse and even conflicting claims made over the centuries within Islam as well as Judaism. He offers us a fascinating and timely account of how the manipulation of ancient myths influences the modern realities of the Arab/Israeli conflict." - S. Ilan Troen, Stoll Family Chair in Israel Studies, Brandeis University; Co-author, with Jacob Lassner, of Jews and Muslims in the Arab World (2007)

"This is a work of great originality. It is an indispensable study which lays out in great detail the dynamic sacrality of Jerusalem in the Muslim world. It is also a unique contribution to the literature on the city and its role in the political and religious conflict between Israelis, Palestinians and Muslims." - Richard D. Hecht, Professor of Religious Studies, University of California at Santa Barbara

"This pathbreaking study will surely be required reading for all those concerned with Jerusalemand the Arab-Israel conflict. It will be on the desk of scholars seeking to understand the conflict and in the briefcase of diplomats trying to resolve it. An admirable achievement." - Marshall J. Breger, Professor of Law, Catholic University of America, Columbus School of Law