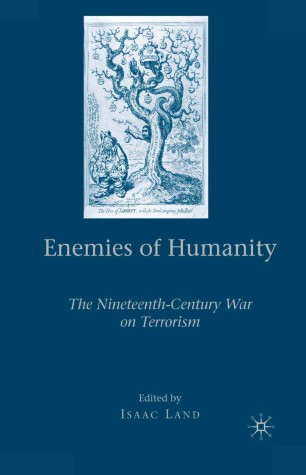 The Nineteenth-Century War on Terrorism

This collection of essays offers a fresh perspective on the definition and origins of terrorism, broadening the field to include slave revolts and urban tensions, and considering how the "war on terrorism" had already matured by 1870 as a way to justify often bloody campaigns against labor unions, nationalist freedom fighters, and reformers.

Isaac Land is an Assistant Professor of History at Indiana State University.

"This collection provides a thought-provoking counterpoint to studies focusing on traditional non-state terrorists." - P.C. Kennedy, Choice"Anyone familiar with terrorist rhetoric that has developed in various parts of the world over the past century is no longer astonished by widespread practices aimed at dehumanization of the enemy. Islamist extremists today have repeatedly portrayed political adversaries as sub-human brutes and likened them to predators or vermin - as did their predecessors among the Russian terrorists a hundred years earlier. With uncommon intellectual dexterity, Enemies of Humanity reverses the picture to announce that in their anti-terrorist campaigns state governments have been dehumanizing the enemy in the very same way.Wars declared on political extremism are not reactive, discover several insightful experts on terrorism, whose articles expound on the volume s underlying theme:intent on extermination, 'it is nihilist governments, not nihilist individuals or small conspiracies, that may ultimately pose the gravest threat to life and liberty.' Who are then the 'enemies of the human race'? To be a fair judge, the reader needs no special expertise but a strong sense of reality." - Anna Geifman, Professor of History, Boston University"Probing the twisted dependence between those who commit shocking acts of antiestablishment violence and the powerful who brand them 'terrorists,' thereby exiling the terrorist from humanity while freeing themselves from the bounds of law, these essays reveal not only why an allegorical 'war on terror' will not soon end but how it has carried on under various guises for over two hundred years." - Timothy Messer-Kruse, Professor of Ethnic Studies, Bowling Green State University