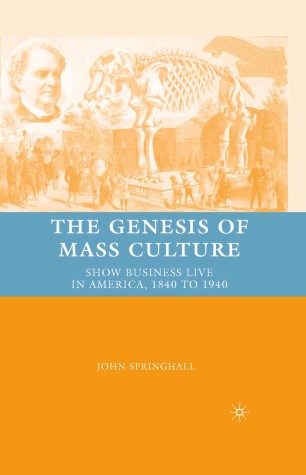 The Genesis of Mass Culture

A thorough survey of the origins and development of the major distinct American commercial entertainments that emerged between over the course of the 19th century and into the 20th, including P.T. Barnum_s American Museum, freak show, and circus, as well as blackface minstrelry, Buffalo Bill_s Wild West Show, and vaudeville.

John Springhall is an Emeritus Professor at the University of Ulster. He is the author of the books Youth, Popular Culture, and Moral Panics and Decolonization since 1945.

"John Springhall has written an informative, useful, well-researched, readable exploration of the fascinating early history of live performance shows, ranging from P.T. Barnum's exhibits to minstrels, circuses, Wild West extravaganzas, and vaudeville." - LeRoy Ashby, Regents Professor and Johnson Distinguished Professor of History at Washington State University and author of With Amusement for All: A History of American Popular Culture since 1830"A thorough survey of the origins and development of the distinct American commercial entertainments that formed the foundation of modern American mass culture and had a major influence on mass culture world-wide. John Springhall gives this topic an international scale by showing the links between European (especially British) origins of circuses and freak exhibitions and their development in the US. He also highlights the cross-Atlantic dimensions of that mass culture in his explorations of the links between music hall and vaudeville, the American attraction to the Swedish Jenny Lynd, the European fascination with the American Wild West Show, and much else. Such a broad study of the rise and linkages between these entertainments has long been needed for understanding of the origins of the distinctly American contribution to modern mass culture." - Gary Cross, Distinguished Professor of Modern History, Penn State University