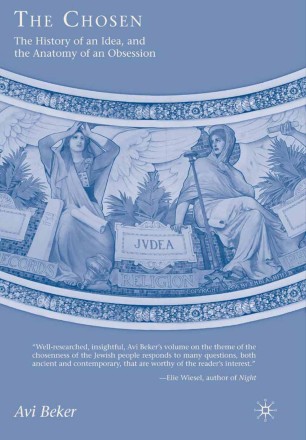 The History of an Idea, the Anatomy of an Obsession

The Chosen explores Judaism s key defining concept and inquires why it remains the central unspoken and explosive psychological, historical, and theological problem at the heart of Jewish-Gentile relations. Crisscrossing the twin cultural and theological divides between Judaism, Christendom, and Islam, The Chosen explains how the Jews, of all people, have come to represent at once the epitome of both the good and the odious. Beker covers not only the great stories of how the Jews came to be chosen and the Christian, Muslim, and Nazi efforts to appropriate the title, but also the key role "chosenness" plays in contemporary anti-Semitism and in the current Middle East conflict over the Land of Israel and the chosen city of Jerusalem.

Avi Beker served as Secretary General of the World Jewish Congress (WJC) until 2003. He served as a member of the Permanent Mission of Israel to the UN and was a delegate to five General Assemblies dedicated to disarmament. He founded the Israel Council for Foreign Relations and the Institute for Research at the WJC. He currently lectures on international diplomacy at Tel Aviv University where he is also head of the UN Project and the Jewish Policy Project.

"Well-researched, insightful, Avi Beker s volume on the theme of the chosenness of the Jewish people responds to many questions, both ancient and contemporary, that are worthy of the reader s interest." - Elie Wiesel, author of Night

"The Chosen takes up a concept that goes straight to the heart and root of Judaism - the role of chosenness that the Jews saw for themselves and the role which they played in the unfolding history of our civilization. Beker makes an important contribution in taking us back to the sources of the deep and embedded hatred of the Jews over the centuries. This scope of the book makes it very important to scholars, activists, and anyone interested in a very unique approach to an ancient puzzle." - Natan Sharansky, Israel s Minister for Jerusalem & Diaspora Affairs, and former Jewish human rights activist

"Avi Beker s The Chosen is the most important book on Jewish identity to appear in recent times. Highly readable, yet based on extensive scholarship, The Chosen portrays the drama of Jewish history and identity through an exploration of Judaism s key defining concept. Beker s is the first work of this nature to appear since the twelfth century." - David Chanoff, co-author of Ariel Sharon s Warrior: An Autobiography