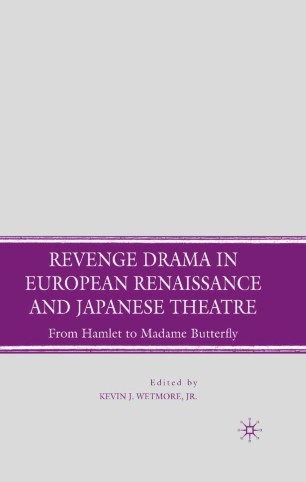 From Hamlet to Madame Butterfly

Revenge Drama in European Renaissance and Japanese Theatre is a collection of essays that both explores the tradition of revenge drama in Japan and compares that tradition with that in European Renaissance drama. Why are the two great plays of each tradition, plays regarded as defining their nations and eras, Kanadehon Chushingura and Hamlet, both revenge plays? What do the revenge dramas of Europe and Japan tell us about the periods that produced them and how have they been modernized to speak to contemporary audiences? By interrogating the manifestation of evil women, ghosts, satire, parody, and censorship, contributors such as Leonard Pronko, J. Thomas Rimer, Carol Sorgenfrei, Laurence Kominz explore these issues.

"Wetmore offers a fine, distinctive collection on the tradition of revenge drama in significant plays found in two theatrical realms-Asia (specifically Japan) and Europe (mostly Europe and Spain). The juxtapositions of two divergent cultures as seen through the lens of one particular type of play shakes loose valuable insights about the nature of each, particularly about the modes of expressing the values of both cultures." - Choice

"Ten distinguished Japanologists, who are no less knowledgeable about European culture, discuss revenge-one of the oldest and most common themes in drama. The result is cultural studies at their most exciting, as well as literary criticism at its most precise. This highly readable book contains a lot of valuable informationfor general readers, and even specialists of Kabuki or Shakespeare will be thrilled to find something new about the works they thought they knew well. It shows eloquently how happily and creatively East and West can meet." - Tetsuo Kishi, Emeritus Professor of English, Kyoto University; Vice-Chair of the International Shakespeare Association; and co-author of Shakespeare in Japan

"This is perhaps the first attempt in English in book form to compare revenge drama in Japan and Europe. The authors of the articles, writing primarily from an American viewpoint, analyze similarities and dissimilarities between revenge traditions. The book is a real challenge to Japanese students of drama, and the interpretations and analyses undoubtedly will stimulate valuable discussions between Japanese and Western scholars, serving as a starting point of future comparative studies of revenge drama." - Mitsuya Mori, Professor of Theatre Studies, Seijo University