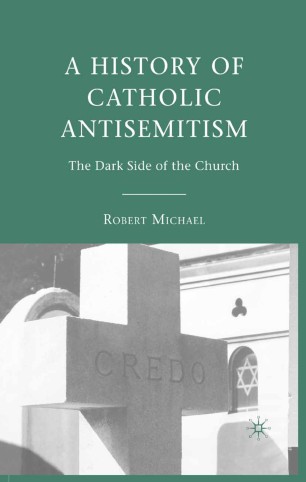 A History of Catholic Antisemitism

The Dark Side of the Church

Moving from the Catholic Church's pagan origins, through the Roman era, middle ages, and Reformation to the present, Robert Michael here provides a definitive history of Catholic antisemitism.

ROBERT MICHAEL Professor Emeritus of European History at the University of Massachusetts, Dartmouth, USA. Listed in Who's Who in America, Professor Michael was a 1997 recipient of the American Historical Association's James Harvey Robinson Prize for the 'most outstanding contribution to the teaching and learning of history.' A founder of the scholarly e-mail lists H-Antisemitism and H-W-Civ, Dr. Michael has published more than fifty articles and ten books on the history of antisemitism and the Holocaust.

"Michael's work is path-breaking, in that few before him have tackled both the historical and theological foundations of Catholic antisemitism and, at the same time, traced its path from biblical times all the way through to Auschwitz. In this, Michael is brave; but, as this outstanding work shows, his bravery is vindicated. His treatment of such topics as the Church s age-old and ongoing dehumanization of the Jews, coupled with its failure to confront that supreme manifestation of evil that became manifest in the Nazis, is an important contribution to an already massive literature on antisemitism and the Holocaust." - Paul R. Bartrop, Head, Department of History, Bialik College, Melbourne, Australia