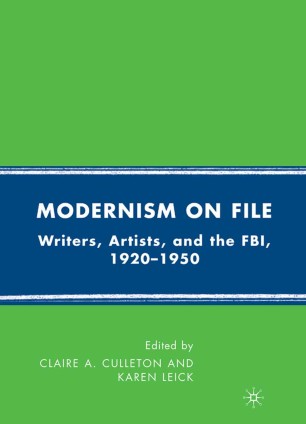 Modernism on File: Writers, Artists, and the FBI, 1920-1950 brings together important new scholarship focused on J. Edgar Hoover's FBI and its institutional presence in shaping and directing American print, film, and art culture. From Harlem to Hollywood, Hoover and his bureau workers were bent on decontaminating America's creativity and this collection looks at the writers and artists who were tagged, tracked, and in some cases, trapped by the FBI. Contributors detail the threatening aspects of political power and critique the very historiography of modernism, acknowledging that modernism was on trial during those years.

"Edited by Claire A. Culleton and Karen Leick, this new anthology belongs to a group of works that is now almost large enough to constitute its own genre: the criticism of FBI files. . . . Herbert Mitgang s Dangerous Dossiers: Exposing the Secret War Against America s Greatest Authors first appeared in 1988, Natalie Robins s Alien Ink in 1992. Claire Culleton s own Joyce and the G-Men: J. Edgar Hoover s Manipulation of Modernism came out in 2004, and along with Mitgang s and Robins s books, laid the groundwork for the essays in the new anthology. What these books have revealed or highlighted is that the FBI, and J. Edgar Hoover in particular, had an extraordinarily obsessive interest in modern literature. Hoover, it is worth remembering, began his career as a librarian, and throughout his forty-eight-year tenure as the director of the FBI he retained the librarian s intense, schematic, and classificatory relationship to written texts....A central claim of Modernism on File is . . . that the cultural politics of the 1950s suppressed both the history of politically engaged writing from the 1920s on and radical writers themselves, and thus produced a version of modernism that was apolitical and stylistically abstruse. One might even be tempted to argue that the canonical high modernism that has come down to us is, in essence, only what managed to evade the external, and internalized, forces of repression most concretely embodied in the bureau." - American Literary History 22.3 (Fall 2001)

"[T}he data set acquired by Culleton, Leick, and their contributors is stunning in every sense of the word: thousands of pages of FBI documents, often heavily 'redacted' (that is, blacked out), obtained under the Freedom of Information Act (FOIA)...Modernism on File reminds us that intimidation comes in many shapes and sizes. Its lessons help us to realize that the regulation of authors and authorship is a perennial temptation, for both private and governmental actors" - James Joyce Literary Supplement