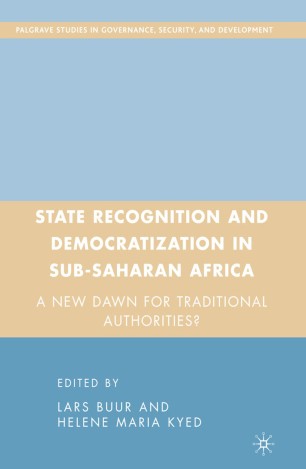 A New Dawn for Traditional Authorities?

Part of the Palgrave Studies in Governance, Security, and Development book series (GSD)

Being critical and empirically grounded, the book explores the complex, often counter-balancing consequences of the involvement of traditional authority in the wave of democratization and liberal-style state-building that has rolled over sub-Saharan Africa in the past decade.

LARS BUUR (PhD) is a Senior Researcher at the Danish Institute for International Studies and a Research Associate of the Wits Institute for Social and Economic Research, Johannesburg, South Africa, with long-term field research experience in South Africa and Mozambique. His current research focuses on traditional leaders and the politics of decentralization and governance in Mozambique. His major publications to date are (as co-editor) Everyday Policing in South Africa (2004); the anthologies The Security-Development Nexus: Expressions of Sovereignty and Securitization in Southern Africa (2007); and State Recognition of Local Authorities and Public Participation: Experiences, Obstacles and Possibilities in Mozam­bique (2007). He has published several articles in Anthropology and Humanism, FOLK (Royal Danish Ethnographic Society), African Studies, Review of African Political Economy, Journal of South African Studies and Development and Change, as well as numerous peer-reviewed book articles on human rights, truth and reconciliation, vigilantism, traditional authority and sovereignty.

HELENE MARIA KYED is a PhD candidate at Roskilde University and the Danish Institute for International Studies, Denmark, with an MA honors in Social Anthropology from Aarhus University. Her master's thesis dealt with decentralization and local politics in Zimbabwe. At the moment, she is completing her PhD thesis on State Formalization of Traditional Authority: State Formation, Decentralization and Changing Forms of Authority in Mozambique, based on fourteen months of fieldwork in Manica Province. She has co-edited an anthology, State Recognition of Local Authorities and Public Participation: Experiences, Obstacles and Possibilities in Mozam­bique, to be published in 2007. She has published articles in Development and Change and the Journal of Southern African Studies, as well as peer-reviewed chapters in The Security-Development Nexus and Global Vigilantes on the topics of traditional authority and local forms of justice enforcement and policing.

"State Recognition and Democratization in Sub-Saharan Africa addresses one of the central challenges of contemporary democracy in Africa with seriousness and sophistication. Any simplistic notions that traditional leaders provide a panacea for democratic deficits are rendered invalid through rich empirical investigations, revealing the connections between the recognition of traditional authorities and global discourses and strategies of governance. Empirically rich and theoretically grounded, this excellent collection is a crucial reminder that the democratic potential of traditional structures cannot be taken for granted, but requires critical scrutiny." - Rita Abrahamsen, Professor of Postcolonial Studies, University of Wales, United Kingdom

"Buur s and Kyed s work offers a coherent and insightful analysis of all the complexities in the articulation of traditional chieftaincy and the state in Africa in the 1990 s. This book supersedes simplistic interpretations of the return of chieftaincy as being good or bad for democratisation. It shows that both local state and chiefs are re-shaping themselves in this articulation. Moreover, the book shows how this is further complicated by the intervention of neo-liberal donors with their novel and somewhat surprising love of tradition. A rich empirical collection with forceful analytic coherence." - Peter Geschiere, Professor of African anthropology, University of Amsterdam, The Netherlands

"The book is valuable in its contribution to understanding post-1900 democratic development in Africa." - Joleen Steyn-Kotze, Nelson Mandela Metropolitan University