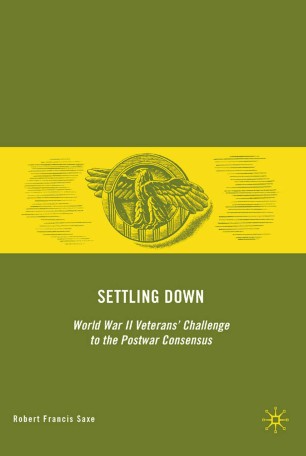 This book examines the lost voices of returning World War II veterans in the immediate postwar years and shows how the developing Cold War silenced or altered dissenting opinions that many vets expressed upon their return.

Robert Francis Saxe is an Assistant Professor of History at Rhodes College.

"This well researched, clearly written study deserves an important place on the shelf of books about World War II veterans. Diversity, the author documents, not homogeneity, characterized the sixteen million veterans, a diversity that the emerging Cold War consensus erased. The excellent study iscompelling and convincing." - Keith W. Olson, Professor of History, University of Maryland, College Park"Settling Down reminds us that many returning GIs in 1945 were ambivalent both about their military service and their prospects in postwar American society. Far from being greeted as the 'Greatest Generation,' many civilians wanted these returning GIs to quickly lose their veteran identity and meld back into the mainstream. Saxe is best at examining how an emerging Cold War consensus crushed the American Veterans Committee and the limited the efforts of black veterans to challenge the institutional racism that permeated American society. An important addition to the growing body of scholarship examining the veteran experience in American society." - G. Kurt Piehler, Founding Director, (1994-1998) Rutgers Oral History Archives of World War II and Director, Center for the Study of War and Society