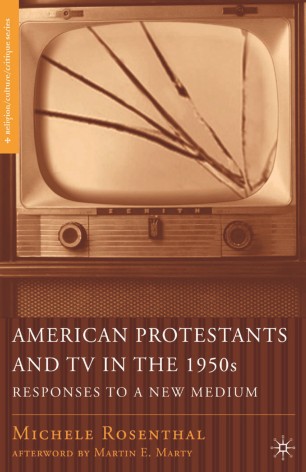 American Protestants and TV in the 1950s

Responses to a New Medium

Americans in the 1950s faced the challenge of negotiating the new medium's place in the home and in American culture in general. Using the American Protestant experience of the introduction of television, Rosenthal illustrates the importance of the interplay between a new medium and its users.

MICHELE ROSENTHAL is Professor in the Department of Communication at the University of Haifa, Israel.

"Why are evangelicals early adopters of new media technology while the

Protestant mainline responds ambivalently to innovations in mass communications? Rosenthal analyzes the nexus of technology, faith, and culture to answer key questions in the emerging field of religion and media studies. Her book extends previous scholarship on religion and television through in-depth case studies of how American religious groups responded to the potential of a new medium for outreach." - Diane Winston, Knight Chair in Media and Religion, Annenberg School for Communication, University of Southern California

"Rosenthal's outstanding account fills a long-standing gap in our understanding of American media history. The new medium of television posed a perceived threat to the authority of the Protestant establishment in education, politics, and the domestic sphere. The reaction Rosenthal details tells us much about the place of Protestantism in the culture in the mid-twentieth century and much about how the media age has de-stabilized and re-structured religion and religious institutions. This excellent history provides fascinating and telling insights into the ways that these institutions saw themselves and this new medium. Their perception of threats to institutional authority and to domestic values posed by television continues to echo across debates over the role of media in the U.S. An invaluable resource to scholars and educators in religious studies, religious history, media studies, media history, and media policy." - Stewart M. Hoover, Professor, School of Journalism and Mass Communication and Director, Center for Media, Religion, and Culture, University of Colorado

"In this engaging and accessible book, Rosenthal studies American Protestants at mid-century - then the clear leader in the realm of religious influence on American politics - to learn why they were so skittish about television, and how that contributed to the rise of evangelicalism s power in the U.S. This is a provocative look at a previously untold story, and anyone who wonders about how U.S. religion came into its current configuration in public life needs to read this book." - Lynn Schofield Clark, author of From Angels to Aliens