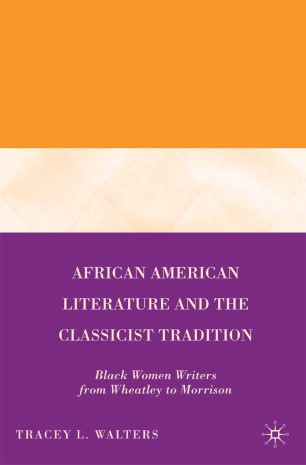 This is a groundbreaking study exploring the significant relationship between western classical mythology and African American women's literature. A comparative analysis of classical revisions by eighteenth and nineteenth century Black women writers Phillis Wheatley and Pauline Hopkins and twentieth century writers Gwendolyn Brooks, Toni Morrison, and Rita Dove reveals that Black women writers revise specific classical myths for artistic and political agency. The study demonstrates that women rework myth to represent mythical stories from the Black female perspective and to counteract denigrating contemporary cultural and social myths that disempower and devalue Black womanhood. Through their adaptations of classical myths about motherhood, Wheatley, Ray, Brooks, Morrison, and Dove uncover the shared experiences of mythic mothers and their contemporary African American counterparts thus offering a unique Black feminist perspective to classicism. The women also use myth as a liberating space where they can 'speak the unspeakable' and empower their subjects as well as themselves.

'Not many scholars have the opportunity to trail blaze and publish a seminal work; Walters has a just that, and will make a major impact on scholarship in Classics, Black Studies, and Comparative Literature. Walters' work fosters discussion on how black women have used the classics as empowering, complicated, subtle; how black women signify off of one another; and generally how a handful of extremely important writers from a local or specific context found universal appeal. Walters moves from Phillis Wheatley to Rita Dove, while also discussing authors such as Gwendolyn Brooks and Toni Morrison. This is a wonderful array of significant authors.' - Patrice Rankine, Purdue University