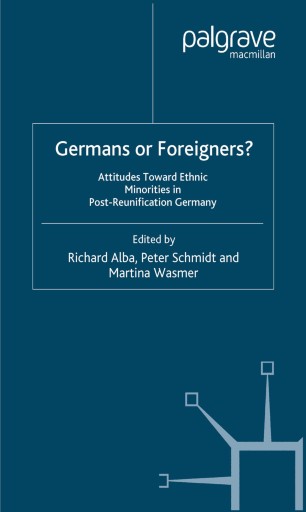 Germans or Foreigners? Attitudes Toward Ethnic Minorities in Post-Reunification Germany

This book examines contemporary attitudes towards ethnic minorities in Germany. These minorities include some of immigrant origin, such as Italians, Turks, and asylum seekers, and the principal non-immigrant minority, Jews. While the findings demonstrate that intense prejudice against minorities is not widespread among Germans, many of whom in fact can be considered immigrant- and minority-friendly, a crystallization of attitudes is also evident: that is, attitudes towards immigrants are strongly correlated with anti-Semitism and with other worldview dimensions, such as positioning in the left-right political spectrum. In this sense, the fundamental question of whether immigrants and other minorities should be regarded as fellow citizens or ethnic outsiders remains relevant in the German context.

"Alba, Schmidt and Wasmer have assembled an impressive group of

and clarification about the situation in which ethnic minorities find

with in-depth qualitative analysis, this volume is an excellent example

of how scholarship can be relevant and readable at the same time. This

book is essential reading for academics and students interested in

contemporary Germany and its minorities."

In this carefully researched and balanced analysis, Richard Alba and his German colleagues present powerful evidence concerning so many of the key issues in the debate about Germany's current attitudes towards diversity. Various chapters provide insight and analysis of

ethnocentrism, civil rights, anti-semitism, authoritarianism, the Far Right, and the legacy of regional divisions. This is a fascinating and authoritative study for anyone wishing to understand the complexity of contemporary Germany and the ethnic dynamics of the new Europe. - John Stone, Boston University

Focussing on immigration demographics and the social and psychological determinants of mass-level German xenophobia, this edited volume gives English-speaking readers unparalleled access to the work of Germany's top scholars of ethnic attitudes. Especially path-breaking are the authors' application of "symbolic racism" theory in the German context and their findings that current German anti-Semitism is linked to anti-Muslim sentiment and that Germany's proportion of immigrants is higher than even the United States'. This book is mandatory reading for all students of contemporary German public opinion, immigration politics, and ethnic relations.

Assistant Professor of Political Science, Pepperdine University, and author, Public Attitudes toward Immigration in the United States, France, and Germany