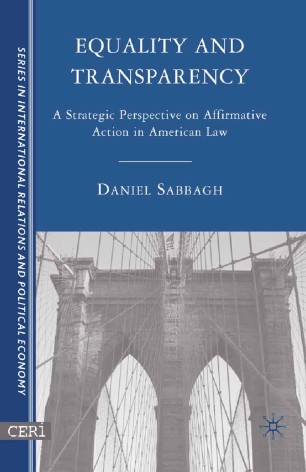 A Strategic Perspective on Affirmative Action in American Law

Can affirmative action policies be convincingly justified? And how have they been legitimized over time? In a pluridisciplinary perspective at the intersection of political theory and the sociology of law, Daniel Sabbagh criticizes the two prevailing justifications put forward in favor of affirmative action: the corrective justice argument and the diversity argument.He defends the policy instead as an instrument designed to bring about the deracialization of American society. In this respect, however, affirmative action requires a measure of dissimulation in order to succeed.Equality and Transparency explains why this is so and provides a new interpretation of the strategic component in the Supreme Court's case law while identifying some of its most remarkable side effects.