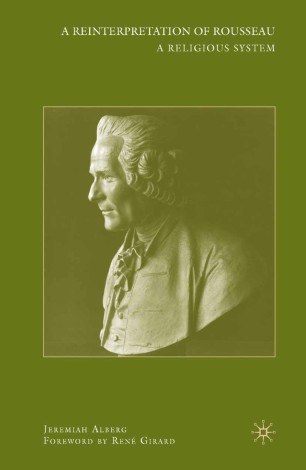 A Reinterpretation of Rousseau

In this radical reinterpretation of Rousseau, Jeremiah Alberg argues that the philosopher's system of thought is founded on theological scandal, and on Rousseau's inability to accept forgiveness. Alberg explores his views in relation to alternative forms of Christianity.

JEREMIAH ALBERG is Associate Professor of Philosophy and Director of the Philosophy Program, University of West Georgia, USA.

"It is in fact a lavishly researched and tautly reasoned achievement, won in fertile and respectful conversation, as his ample footnotes exhibit, with the enormous host of ROUSSEAU scholars. More precisely, it completes the work of Jean STAROBINSKI, in whose groundbreaking Jean-Jacques Rousseau: La Transparence et l'obstacle (Paris: Gallimard, 1957) the word "scandal" appears on the third page as a synonym for ROUSSEAU'S quarrel with society and culture as a whole. ALBERG uncovers every facet, every bounce and rebound of this obstacle in ROUSSEAU'S work." - The Bulletin of theColloquiumon Violence & Religion"An important contribution to the understanding of a profound and influential thinker." - Christopher Kelly, Professor, Department of Political Science, Boston College

"No one expects a merciful inquisition. Jeremiah Alberg, in a book which those who are not Rousseau scholars will find difficult at first, but which eventually yields great insight, takes Rousseau at his word but refuses to be scandalized by him. He shines a gentle light on the admittedly scandalizing and scandalized nature of Rousseau's own thinking, and reveals quite how central to the whole of Rousseau's project and rationality is a scandalized pattern of desire, one where a person is simultaneously attracted to and repelled by the same object, and so is locked into a double-bind of the sort made luminous in the thought of René Girard. Alberg's central insight is that Rousseau is simultaneously dependent on, and yet rejecting of, the Christian doctrine of original sin, a doctrine which he (as well as his contemporaries) regarded as a form of primordial accusation, rather than what it is: a perspective on who we are, which could have only come into being through an even more primordial forgiveness. And this insight shows a way of being both much more severe with Rousseau, and much kinder to him than I, and I suspect he, could have imagined." - James Alison, Catholic priest and theologian

"Jeremiah Alberg's book on Rousseau shows ushow this rogue redeemer takes us to the core of the interpersonal pathologies, the underground psychology, that René GIRARD has analyzed magisterially in Dostoevsky, Nietzsche, and other great writers, and that continue to afflict the modern psyche. His analyses garner well-earned praise from Girard in a foreword to 'this beautiful

book,' which luminously reorganizes Rousseau's entire work around the notion of scandal as it involves a complex of interpersonal

relations that extends to all levels of social organization." - The Bulletin of the Colloquium on Violence & Religion