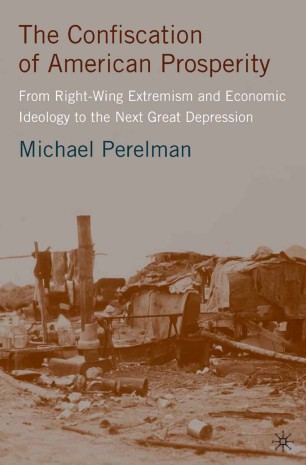 The Confiscation of American Prosperity

This book argues that the right-wing revolution in the United States has created deepening inequality and will lead to economic catastrophe. The author makes the case that over the past three decades the rich have confiscated wealth and income from the poor and middle class to a far greater extent than many realize, and he explores in detail important but commonly unmeasured dimensions of inequality. He also takes aim at the economics profession, criticising the analytical blinders that leave economists incapable of seeing the coming crisis.

MICHAEL PERELMAN is a Professor of Economics at California State University, Chico, USA. He is a visiting scholar at the University of Paris. He has published 19 books, including Railroading Economics, Manufacturing Discontent, The Perverse Economy, and The Invention of Capitalism.

"Can a recent history of the U.S. economy read a bit like a crime story? Yes, in the hands of Michael Perelman" - Seth Sandronsky, Sacramento News & Review

"The Confiscation of American Prosperity is a highly readable work that offers equal servings of serious economics and controlled anger. Michael Perelman is outraged by 30 years of deepening disparities in the U.S. economy, and by the fact most economists either ignore the reality before them or worse, provide academic firepower on behalf of a more unequal and unstable society. Read Perelman, and prepare to be challenged, both intellectually and morally." - Robert Pollin, professor of Economics and co-director of the Political Economy Research Institute (PERI), University of Massachusetts-Amherst

"This book gives an original perspective on the changes in the country over the last three decades. It documents how the wealthy have managed to structure the economy so that they could monopolize the gains from growth over this period. It shows how the resulting growth in inequality is undermining economic stability and productivity growth, creating an economy and society that will not be sustainable in the long-run." - Dean Baker, co-director, Center for Economic and Policy Research

'Michael Perelman is author of a long series of important works on the history and theory of capitalism. In his latest book, The Confiscation of American Prosperity, he offers an integrated account of economic and political developments in the postwar period that could not be more timely. Going beyond moral denunciation of the ever-worsening distribution of income and wealth, he shows the way in which an ascendant far right used the levers of power to counter declining profitability, but, in the process of assaulting American living standards and further enriching the wealthy, ended up weakening the mainsprings of the economy and preparing the ground for devastating crisis. This is a story that economic orthodoxy cannot tell but one that everyone needs to hear.' - Robert Brenner, director, Center for Social Theory and Comparative History, UCLA

"In this age of ever-increasing concentrations of power and wealth, economists have been quick to attribute changes in inequality to factors such as globalization and technological change, while paying much less attention to the social and political forces that have shaped the outcome. With its analysis of the political, economic, and social forces behind recent changes in the distribution of power, wealth, and income, this book takes important steps to fill this void. Beginning with its analysis of the right wing's exploitation of the discontent from the unraveling of the Golden Age as a means to promote free-market ideology, continuing with its analysis of later efforts to further free-market ideology in the political and public arenas, and ending with its characterization of where we are now, this book helps us understand how we attained the level of inequality we have today, and where we might be headed next." - Mark Thoma, Associate Professor of Economics, University of Oregon