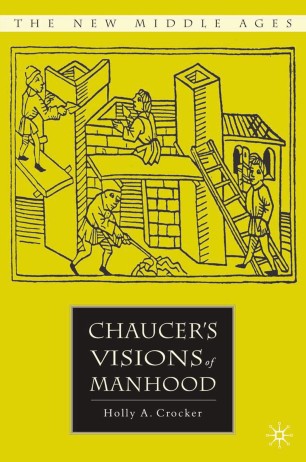 This book argues that Chaucer challenges his culture's mounting obsession with vision, constructing a model of 'manhed' that blurs the distinction between agency and passivity in a traditional gender binary.

HOLLY CROCKER is Assistant Professor of English at the University of South Carolina, USA.

'This is a stellar addition to the growing galaxy of books and articles on Chaucer's construction of gender. Crocker takes a fresh look at visibility and invisibility, agency and identity, transgression and performance in The Book of the Duchess and several of the narratives in the Canterbury Tales. Chaucer's Visions of Manhood is balanced, original, sophisticated, and firmly grounded both in medieval ocular theory and in the psychoanalytic and historicist theories of modern scholars. Appropriately for a book on vision and visibility, it gives us fresh insights on every page, and it leaves us, finally, with a sensible view of Chaucer-the pilgrim, the poet, and the man.' - Peter G. Beidler, Lehigh University; Editor of Masculinities in Chaucer

'Crocker's subtle and learned illumination of the dialectics of [in]visibility that undergirds gender formation in Chaucer's poetry moves critical discussion of gender in late medieval poetry to another level. Rather than presenting a predictable analysis of Chaucer's male characters, she traces Chaucer's challenge to masculinity's [in]visible privilege in order to reveal the multiple possibilities for both male and female agency afforded by Chaucer's work. This is a book that everyone interested in historicizing theories of the gaze must read.' - Elizabeth Robertson, University of Colorado at Boulder