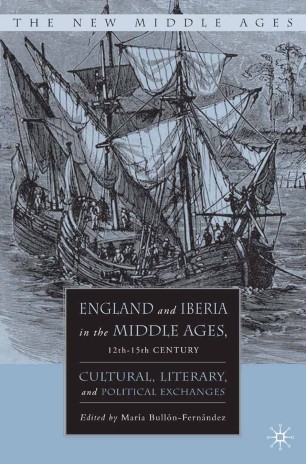 England and Iberia in the Middle Ages, 12th–15th Century

This groundbreaking interdisciplinary collection of essays by American, British, and Iberian scholars examines the literary, historical, and artistic exchanges between England and Iberia from the Twelfth to Fifteenth century.

'After centuries of spotty scholarly attention, this volume reignites serious conversation about the traffic in ideas and cultures between England and Iberia. The Middle Ages saw more than pilgrims to Canterbury and Compostela crossing the seas between Iberia and the British Isles. Diplomats and soldiers, poets and princes wandered from England to the kingdoms of Spain and Portugal and back again with their manuscripts, trade goods and even royal brides. This volume gathers vigorous studies that explore the cultural rub between England and Portugal, Galicia, Castilla and Cataluña and investigates their secular commerce, sacred communions, and royal congress. England and Iberia re-frames forgotten friendships and some of the lively rivalries that engaged diverse societies at every level of faith and feud.' - George D. Greenia, College of William and Mary

'This book is a truly excellent collection of essays on the medieval relations between England and the great peninsula to the south; it is chock-full of learning, in both expected and unexpected areas, with a very welcome stress on Portugal, as well as coverage of mainstream Spanish connections.' - Henry Ansgar Kelly, UCLA

'This is a well-conceived, uniformly strong collection of essays. Bullón-Fernández and the contributors have done a real service to the field of medieval studies by opening the path to a rich, compelling area of scholarship that has too long been understudied. This volume should be of interest to early modernists as well as medievalists, since the perspectives on England and Iberia offered here are likely to help reframe more established comparative studies of cultural and political relations among England, Spain, and Portugal in the early modern era.' - Nancy Warren, Florida State University