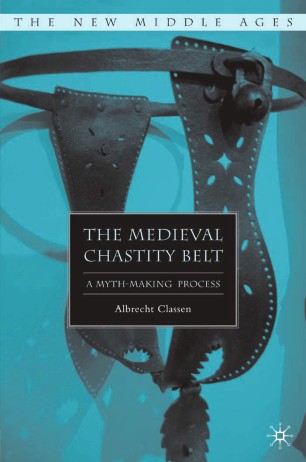 The chastity belt is one of those objects people have commonly identified with the 'dark' Middle Ages. This book analyzes the origin of this myth and demonstrates how a convenient misconception, or contorted imagination, of an allegedly historical practice has led to profoundly flawed interpretations of control mechanisms used by jealous husbands.

ALBERCHT CLASSEN is a medievalist in the Department of German Studies at the University of Arizona, Tucson, USA.

"In this huge project, Professor Classen has dared to tread on ground often shunned by many scholars and manages to make this book quite delightful in some of its surprising literary discoveries. His research is thorough, his prose readable and enjoyable, the subject captivating." - Studies in Medieval and Renaissance Teaching"Classen's analysis of the mythology of the chastity belt is nothing short of brilliant. His dissection of the literary and iconographic evidence from the late Middle Ages to the twentieth century is exhaustive and highly illuminating. By surveying texts in a wide range of languages, he demonstrates the longevity of a mythic notion with no historical substance. In the process, he sheds profound light on the images about sexuality and purity in medieval literature and art, radically misunderstood in the modern period. This book is to be recommended to specialists in medieval and early modern culture as much as to those generally interested in the capacity of myths to shape and distort our understanding of sexual identity." - Constant J. Mews, Monash University

"In this tour-de-force, Classen explodes the myth of the medieval chastity belt, but he also does more. He reveals how the myth came into existence and how it grew over time. In doing so, he has written a witty and fascinating piece of intellectual and social history which transcends the boundary between the medieval and modern and is exemplary in its scholarship and balance." - William Chester Jordan, Dayton-Stockton Professor of History, Princeton University

"What a delight! With humor, erudition, and afine sense of history's changing mind-sets, Classen takes the reader on a wonderful and surprising journey into a realm where academics often fear to tread. Many amodernscholarmay be a bit chagrined by Classen's research and results, but wholly captivated; and the medievalist will surelysmile." - G. Ronald Murphy, SJ, Georgetown University

"The chastity belt is a bizarre product of the modern imagination, which tirelessly dreams up medieval weirdnesses. Classen's book is a riveting odyssey through the grand-guignol-visions and museum fabrications inspired by the idea of the chastity belt. Classen's research is superbly thorough, his prose readable, the subject endlessly interesting. This book reveals more about the modern imagination than medieval barbarity." - C. Stephen Jaeger, University of Illinois, Urbana/Champaign"Classen s book is a great accomplishment. His argumentation demonstrates not only a profound knowledge of a large corpus of sources in multiple languages, but also a high methodological level of reflection. One can only hope that medieval scholarship will produce more studies like this one that in the best sense of the word serves scholarly enlightenment." - Wissenschaftlicher Literaturanzeiger