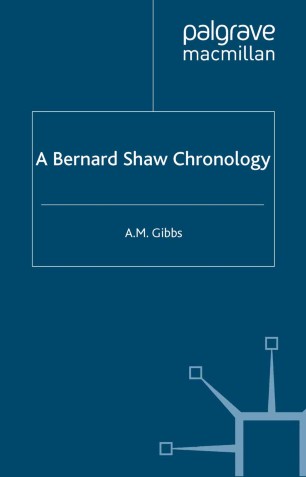 A.M. Gibbs provides an authoritative and comprehensive account of the life, career and associations of George Bernard Shaw (1856-1950), one of the most eminent and influential literary figures of the modern age. Drawing on a wide range of published and unpublished material, this work illuminates the complex fabric of Shaw's extraordinary career as playwright, novelist, critic, orator, political activist, social commentator, avant-garde thinker and controversialist. Images of Shaw's daily private life, and of his tangled love affairs, flirtations and friendships, are intertwined with the records of his prodigiously productive career as public figure and creative writer, in a fully documented study which is both a scholarly resource and a lively biographical portrait. An introductory chapter explores theoretical issues in biography raised by the chronology form; and a chapter on Shaw's ancestry and family supplies new evidence about his Irish background. A Who's Who section contains thumbnail sketches of over two hundred contemporaries of Shaw who had significant associations with him.

A.M. GIBBS is Emeritus Professor of English at Macquarie University, Sydney. He is a graduate of Melbourne and Oxford Universities and a Fellow of the Australian Academy of the Humanities. He has written and edited five books on the life and work of Bernard Shaw, including The Art and Mind of Shaw: Essays in Criticism (1983), Shaw: Interviews and Recollections (1990), and 'Heartbreak House': Preludes of Apocalypse (1994).

“[A] sumptuous, meticulously documented volume … Over a career of writing about Shaw A.M. Gibbs has established himself as one of the most distinguished Shaw scholars in the world.” (Charles A. Carpenter, SHAW: The Journal of Bernard Shaw Studies, Vol. 24, 2004)

“This Chronology, especially with the accompanying “A Shaw Who’s Who” giving brief accounts of all the most important people in his life, will be of great value as a reference work for anyone who wants to know what Shaw was up to and when and with what associates ... Bernard Shaw lived his allotted span of 94 years. A.M. Gibbs’s Chronology chronicles it in its entirety, skilfully, scrupulously, impartially.” (Nicholas Grene, Irish Studies Review, Vol. 10 (2), August, 2002)

“This chronicle is a tour de force …A.M. Gibbs has made a vital contribution to Shaw studies with this indispensable reference guide.” (Michel Pharand, English Literature in Transition, Vol. 4 (5), 2002)

“A Bernard Shaw Chronology fills the gaps left by earlier biographies more concerned with narrative than factual data …With its impressive breadth and detail, the chronology is a valuable resource for Shaw scholars.” (Joann Scholtes, Reference Reviews, Vol. 15 (8), 2001)

Reviews of previous books on Shaw by A.M. Gibbs

'Everybody who is interested in Shaw will find this book challenging, informative and stimulating.' - William A. Armstrong, The Shavian

'He is always inside Shaw, discussing individual plays with depth of sensibility and range of vision and suggesting various revisions of conventional estimates...Brief as it is, this book bids fair to become a classic in Shaw criticism.' - F.P.W. McDowell, Journal of Modern Literature

Reviews of Shaw: Interviews and Recollections

'Shaw: Interviews and Recollections may be the best one-volume life of Shaw we have.' - Stanley Weintraub, English Literature in Transition

'The primal impulse behind biography drives the collection: the desire not to forget the rare, winsome and astonishing...Gibbs extends the spectrum of witness immensely and, through subtle juxtaposition, effects keenest dialectic.' A.E. Wallace Maurer, Modern Drama

'As fascinating as it is informative.' - T.F. Evans, The Shavian

'One of the many virtues of this handsome book is the way in which it presents alternative views of the same people and events. It is rather like being told a story about an old friend then hearing it again from someone with a different axe to grind.' - Joan Smith, Guardian Weekly

'A.M. Gibbs has produced an excellent collection, Shaw: Interviews and Recollections, which constitutes a biography through primary materials.' - Trevor Griffiths, The Year's Work in English Studies

'It is by all odds the best short book on Shaw that also attempts to be comprehensive; it is at once concise and intense with the result that virtually every paragraph contains several memorable observations and judgements.' - F.P.W. McDowell, English Literature in Transition

'Helps to substantiate the case for Shaw as a writer of major importance.' - Timothy Kidd, Times Higher Educational Supplement

'Shaw emerges from this reassessment less as a propagandist for socialism and creative evolution than as a dramatist with an awareness of open-ended possibilities and irreducible complexity. Professor Gibbs is particularly good at revealing the sub-text of the plays through his analysis of the narrative stage directions and the cancelled passages in the original drafts.' - Michael Holroyd, London Review of Books

'With this new book Gibbs adds to his reputation as a knowledgeable Shavian and a graceful writer. Heatbreak House: Preludes of Apocalypse makes more accessible a great but superficially strange and forbidding work of art. Gibb's book is the one to consult if the reader or playgoer wishes a full, readable, and challenging introduction, however: it is a definitive statement concerning the current status of Heatbreak House in the annals of literary and dramatic history.' - F.P.W. McDowell, English Literature in Transition

'...a substantial and innovative discussion of Shaw's most elusive and ambiguous...play. It is a tribute to Professor Gibbs's skills as a scholar and critic that his exposition of the matrices from which the play came-biographical, historical, social and literary - and his analyses of the play's symbolism, dramaturgy, ideas and characters do much to reduce the mystery of Heatbreak House.' - John A. Bertolini, Shaw: The Annual of Bernard Shaw Studies