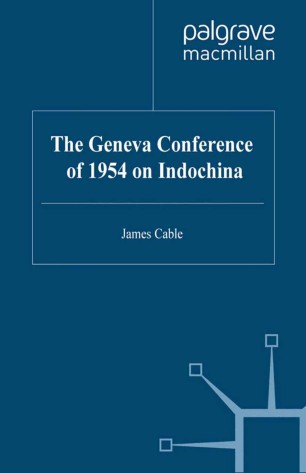 The Geneva Agreements of 1954 were widely welcomed. They ended a seven-year war in Indochina; gave France a dignified exit; averted wider conflict. In later years first Americans and Vietnamese, then Russians, Chinese, Cambodians and even Laotians tried to force Indochina into different patterns of their own devising. These new wars triggered by rejection of the Geneva compromise lasted longer, killed more people, did greater damage and achieved less - for everybody. Perhaps Churchill was right: jaw-jaw is better than war-war. Certainly this lively, first-hand, up-dated account of the Geneva Conference of 1954 - that triumph of old-fashioned diplomacy, which Britain initiated and France completed - offers a better model for the twenty-first century to follow.

SIR JAMES CABLE was twice involved with Indochina: as a Member of the British Delegation to the Geneva Conference in 1954 and as Head of the South East Asia Department of the Foreign Office from 1963 to 1966. Since he retired from the Diplomatic Service as Ambassador to Finland in 1980 he has been a freelance writer and lecturer on international relations and naval affairs. His 13th book, The Political Influence of Naval Force in History, was published in 1998. He has also been a contributor to other books and TV programmes about Indochina.

'Specialists will welcome the reprinting, after fourteen years, of what is probably Sir James Cable's most important book. For, surprisingly, it remains the only work that primarily focuses on the British role in defusing the Indo-China Crisis of 1954...a valuable book which it is good to see available again.' - David Carlton, Times Literary Supplement

'The British delegation included the young James Cable...an engaging writer and a shrewd observer of how personalities affect what goes on round conference tables (and, often more important, in the corridors outside).' - Morrison Halcrow, Daily Telegraph

'Sir James Cable's ...ability to provide a lucid and engrossing account of a dramatic performance that was always taking place on a revolving stage has produced a small jewel of modern diplomatic history.' - Anthony Short, International Relations

'The Geneva Conference was very much a British enterprise. Until now...the British role has never been adequately told. Cable, an insider in the policy deliberations in London and a member of the British delegation at Geneva, adds measurably to our knowledge.' - Journal of Asian Studies

'James Cable's book is a valuable contribution to the already considerable body of literature on Vietnam...and offers the unique perspective that the author, a member of the British delegation at the conference, can provide. His anecdotes and deft portraits of Anthony Eden, Georges Bidault and other leaders enrich the account.' - Donald S. Birn, American Historical Review