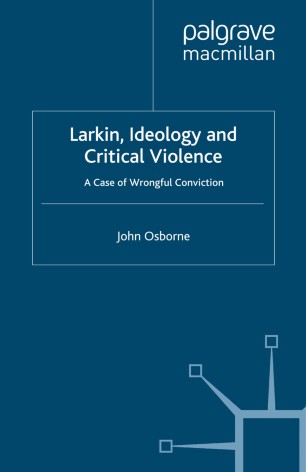 A Case of Wrongful Conviction

This volume combines a theoretical critique of the biographical method that dominates Larkin studies with a revolutionary interpretation of his works that better accounts for their profound influence upon leading Postmodernists like Ian McEwan, David Mitchell, Carol Ann Duffy, Damien Hirst - and the creators of Jerry Springer - the Opera .

JOHN OSBORNE is Director of American Studies at the University of Hull, UK. For ten years (1985-95) he edited Bete Noire magazine and ran what the Guardian described as 'the premier poetry reading series in the English-speaking world'. More recently, he was co-founder and first Secretary of the Philip Larkin Society.

'...a fearless, cogent counter-attack on those sentimentalists and moral simpletons devoted to doing Larkin down for failing to live up to their high, hypo-critical, humourless standards.' -Craig Raine, New Statesman Books of the Year 2010

'Larkin, Ideology and Critical Violence is not only a major contribution to 'Larkin Studies' but should be compulsory reading for all literary students and teachers.' - The Use of English

'Larkin, Ideology and Critical Violence is... exceptional literary criticism...an ideal starting point from which to commence Larkin studies at the beginning of the new century.... If there is now... a lively resurgence of interest in Larkin... John Osborne's book will consolidate it. He is to be congratulated for it and for playing a timely Horatio's part to the wounded name of Philip Larkin.' - About Larkin

'A gifted polemicist with a profound knowledge and love of Larkin's poems, he is illuminating on Larkin in relation to modernism, jazz, philosophy, gender, politics, and 'Englishness', and his method is inspired, close reading.... Including 22 pages of stimulating footnotes, an extensive bibliography, and a thorough index, this volume stands as a major contribution to modern poetry studies and to the workings of critical reception. Summing Up: Recommended. All readers, all levels.' - Choice

'In the court of political correctness, Larkin's conviction looks rock-solid. But in this book John Osborne, a deeply knowledgeable lover of Larkin's verse, aims to challenge the verdict.... His book is a valuable contribution to Larkin criticism... less a poised advocacy than a love song to an unignorable body of texts.' Poetry Nation Review

'All students of Larkin will capitalize on his brilliant observations about the poems and their contexts, his witty argumentation and the admirable knowledge of various fields that he shares with us.... The methodology he offers deserves attention; his close readings are subtle and eye-opening; last but not least, this is typically the kind of book that will generate further fierce debates. This is what everyone will benefit from, whether we agree with the author's ideas or not.' - Hungarian Journal of English and American Studies

'John Osborne's purpose in this adversarial, incisive, and provocative polemic is to rescue Larkin from both his disciples and his detractors, who have combined and conflated the man with his work.... Larkin, Ideology and Critical Violence deserves a wide readership. It sheds light on his oeuvre and its sources, and, most importantly, sends one back to the poems (and prose) with sharpened perceptions.' - Mantex Review