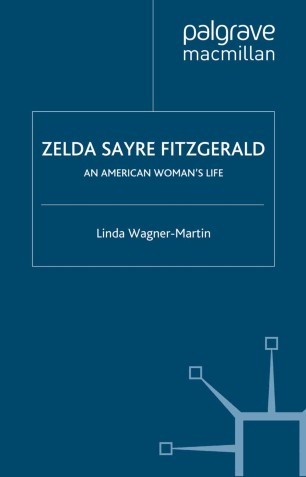 Linda Wagner-Martin's Zelda Sayre Fitzgerald is a twenty-first century story. Using cultural and gender studies as contexts, Wagner-Martin brings new information to the story of the Alabama judge's daughter who, at seventeen, met her husband-to-be, Scott Fitzgerald. Swept away from her stable home life into Jazz Age New York and Paris, Zelda eventually learned to be a writer and a painter; and she came close to being a ballerina. An evocative portrayal of a talented woman's professional and emotional conflicts, this study contains extensive notes and new photographs.

Linda Wagner-Martin is Frank Borden Hanes Professor of English and Comparative Literature at the University of North Carolina at Chapel Hill, USA. She has been a Guggenheim fellow, a Rockefeller awardee, and a resident at Bellagio, Bogliasco, and the Bunting Institute. She recently received the Hubbell Medal for lifetime service to American literature. Her 2013 A History of American Literature from 1950 to the Present is her 53rd book. She has written two other books for this series, one on Ernest Hemingway and the other, in both 1999 and 2003, on Sylvia Plath. She writes widely on twentieth-century American literature, biography, women's writing and pedagogy. Her publications include A Historical Guide to Ernest Hemingway (2000), William Faulkner: Six Decades of Criticism (2002), Zelda Sayre Fitzgerald (Palgrave Macmillan, 2004) and Hemingway: Eight Decades of Criticism (2009).

'Zelda Sayre Fitzgerald: An American Woman's Story is our fullest portrait yet of one of the twentieth century's most intriguing and idiosyncratic women. Linda Wagner-Martin's sympathetic and incisive account changes our image of Zelda from devil-may-care flapper to Southern Belle, from lunatic to professional woman, from hysteric to talented writer. Ballerina, author, mother, and wife, Zelda was the product of a specific time and place. This cultural biography at long last helps us to locate Zelda within an unfolding history of American women's social, sexual, and artistic practices.' - Cathy N. Davidson, Vice Provost for Interdisciplinary Studies and Ruth F. DeVarney Professor of English, Duke University, USA

'Wagner-Martin has done more research into the life of Zelda Sayre Fitzgerald and brought greater intelligence to its interpretation than anyone else. She captures what it was like to grow up a belle in Montgomery, Alabama. She demonstrates how abuse of alcohol, by both parties, impaired Zelda's marriage to F. Scott Fitzgerald. And in an excellent and sensitive reading of voluminous correspondence, some of it available for the first time here, she effectively challenges the easy conclusion that Zelda was a victim of 'madness', a word often used to undermine her value as a human being. Anyone who wants to understand how it was with Zelda and Scott Fitzgerald will learn a great deal from this book.' - Scott Donaldson, author of the Fitzgerald biography, A Fool for Love and Hemingway vs. Fitzgerald

'Zelda Sayre Fitzgerald wanted it all: husband, family, work - along with glamour, fame and creative success. In the psychiatric terms of her time, she was a woman who did not know her place. And she paid an awful price. The question is - would things have been any easier for her today? Once more Linda Wagner-Martin maps the ups and downs of a woman's life in thought provoking and illuminating ways...' - Dale Spender, Adjunct Professor, University of Queensland, Australia

'Prolific literary biographer Wagner-Martin (Sylvia Plath, etc.) utilizes newly available files at Princeton for this fresh reassessment of F. Scott Fitzgerald's flamboyant, creative, troubled wife, stressing that Zelda's personality and character were shaped by her Southern upbringing and her relationship with her parents....Wagner-Martin's sturdy analysis does much to dispel the myth that the necessity of coping with Zelda's mental problems was Scott's tragic nemesis...' - Publishers Weekly

'A prolific author, Wagner-Martin has written biographical and critical studies of many American writers, including Sylvia Plath, Ernest Hemingway and Anne Sexton. Her work in this book, as in many of those previous efforts, excels in its efficiency, clarity and readability.' - Charity Vogel, Buffalo News