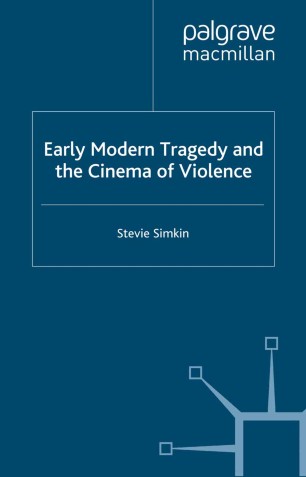 Early Modern Tragedy and the Cinema of Violence

This study considers parallel issues in revenge tragedies of the early seventeenth-century and violent cinema of the last thirty years. It offers a series of provocative explorations of death, revenge and justice, and gender and violence. What happens when we connect The White Devil with Basic Instinct ? The Changeling or Titus Andronicus with Straw Dogs ? Doctor Faustus with Se7en ? Taxi Driver with The Spanish Tragedy ? Appealing to those with an interest in either drama or film, written in an engaging style, the book also reconsiders the high /popular culture divide, and reflects on the enduring significance of the revenge motif in Western culture over the past four hundred years, particularly in the post 9/11 context.

STEVIE SIMKIN is Senior Lecturer in Drama at the University of Winchester, UK. His previous publications include A Preface to Marlowe, Marlowe: The Stage Plays and Revenge Tragedy: A New Casebook. He has particular interests in politicized approaches to staging the plays of Shakespeare and his contemporaries, and in Hollywood film.