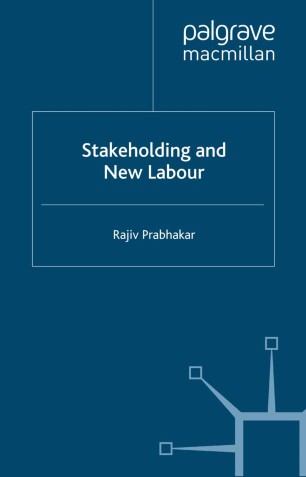 In Stakeholding and New Labour , Rajiv Prabhakar examines two core claims. Firstly, that stakeholding furnishes the centre-left with a set of 'Third Way' principles of public policy that differ from those previously deployed by the Labour and Conservative parties. Secondly, Prabhakar contends that while explicit references to stakeholding have been scaled down by New Labour, the concept remains important for understanding the ideology and the policies of New Labour in government.

RAJIV PRABHAKAR is an Economic and Social Research Council Post-Doctoral Fellow at the Department of Politics, University of Sheffield, UK. He won the Political Studies Association's 2002 Walter Bagehot Prize for Best Dissertation in Government and Public Administration and is the author of a number of articles on political economy.