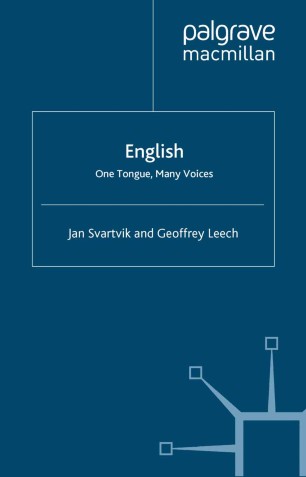 One Tongue, Many Voices

'If you read only one book on the English language-read this one. English - One Tongue, Many Voices covers all aspects of the English language: its global spread, international and local varieties, history from obscurity to primacy, usage and uses, standards and creoles, style and change in progress, politics and controversy. The scope of the book is vast, its depth impressive, and its balance admirable.’
- John Algeo, Professor Emeritus of English, University of Georgia, USA
'I am delighted that Jan Svartvik and Geoffrey Leech have put their hands to this great venture. As experienced collaborators, they bring to the story of English a rare combination of deep scholarly learning and a flair for lively writing.'
- Randolph Quirk, University College London, UK
This is the fully revised and expanded second edition of English - One Tongue, Many Voices, a book by three internationally distinguished English language scholars who tell the fascinating, improbable saga of English in time and space. Chapters trace the history of the language from its obscure beginnings over 1500 years ago as a collection of dialects spoken by marauding, illiterate tribes. They show how the geographical spread of the language in its increasing diversity has made English into an international language of unprecedented range and variety. The authors examine the present state of English as a global language and the problems, pressures and uncertainties of its future, online and offline. They argue that, in spite of the amazing variety and plurality of English, it remains a single language.
Jan Svartvik  is Emeritus Professor at the University of Lund, Sweden. He is co-author of A Communicative Grammar of English(with Geoffrey Leech) and A Comprehensive Grammar of the English Language (with Randolph Quirk, Sidney Greenbaum and Geoffrey Leech). He has published on other varied aspects of English linguistics, such as corpus linguistics, forensic linguistics, contrastive grammar and nautical terminology. He is a Member of the Royal Swedish Academy of Sciences, The Royal Academy of Letters, History and Antiquities and Academia Europaea.
Geoffrey Leech (1935-2014) was Research Professor of Linguistics at Lancaster University, UK. Author, co-author, or co-editor of some 25 books and 100 papers or articles on varied aspects of linguistics and the English language, he was  a Fellow of the British Academy and a Member of Academia Europaea. He was the author of widely used