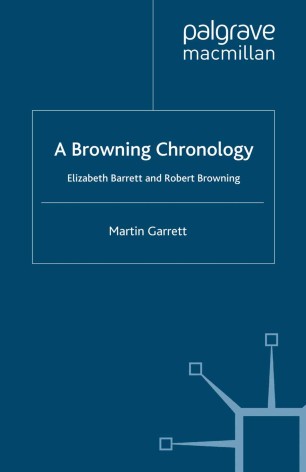 Several thousand letters to and from Elizabeth Barrett and Robert Browning have survived, together with other information on the composition and context of works from Barrett's 'lines on virtue' written at the age of eight in 1814 to Browning's Asolando (1889). The Chronology seeks to guide readers through this mass of material in three main sections: youth, contrasting early backgrounds and careers, and growing interest in each other's work to 1845; courtship, marriage, Italy, and work including Aurora Leigh and Men and Women (1845-61); Browning's later life of relentless socializing and prolific writing from his return to London to his death in Venice in 1889. The book provides not only precise dating but much matter on such topics as the Brownings' extensive reading in English, French and classical literature, their many friendships, and their sometimes conflicting political beliefs.

MARTIN GARRETT has written on Renaissance, Victorian, and other literature. His books include Critical Heritage volumes on Philip Massinger and Sir Philip Sidney and some Literary Companions to Greece and Italy. He has taught for various organisations including several colleges of Oxford and Cambridge Universities.