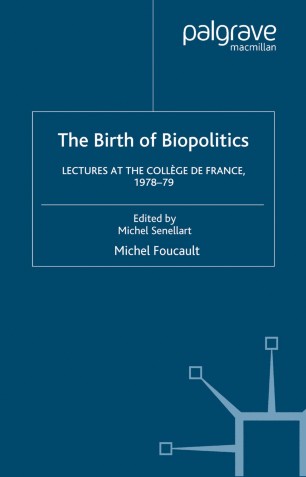 The Birth of Biopolitics

Foucault continues on the theme of his 1978 course by focusing on the study of liberal and neo-liberal forms of government and concentrating in particular on two forms of neo-liberalism: German post-war liberalism and the liberalism of the Chicago School.

Author Michel Foucault: Michel Foucault, acknowledged as the pre-eminent philosopher of France in the 1970s and 1980s, continues to have enormous impact throughout the world in many disciplines.

'Once more Michel Foucault demonstrates that he was perhaps the most prescient and challenging thinker of the twentieth century, and these lectures from 1978-9 have an enduring relevance for all those seeking to understand the forms of liberalism under which we are governed at the start of the twenty first century.' - Nikolas Rose, London School of Economics and Political Science, UK

'This is an excellent translation of Michel Foucault's fascinating lectures on the history of the arts or sciences of liberal government from Adam Smith to the neo-liberalism of the German and Chicago Schools. They throw critical light on the roots of neo-liberal globalization today.' - James Tully, University of Victoria, Canada

'A brilliant, lucid and supremely relevant survey of the true origins of the state which cuts through the imprecision of much more theory and offers ideas which are of direct relevance not just to academics but to those engaged in the political process. A reminder that academic analysis need not be dull and irrelevant. A text, drawn from live speech, which captures the magic of a brilliant mind at work.' - Nick Butler, Cambridge Centre for Energy Studies, UK

Praise for the series:

'These lectures offer important insights into the evolution of the primary focus of Foucault's later work - the relationship between power and knowledge.' - Library Journal

'Ideas spark off nearly every page...The words may have been spoken in [the 1970s] but they seem as alive and relevant as if they had been written yesterday.' - Bookforum

'Foucault is quite central to our sense of where we are...' - The Nation

'[Foucault] has an alert and sensitive mind that can ignore the familiar surfaces of established intellectual codes and ask new questions...[He] gives dramatic quality to the movement of culture.' - The New York Review of Books