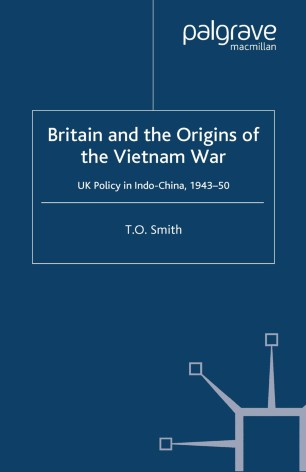 Britain and the Origins of the Vietnam War

British foreign policy towards Vietnam illustrates the evolution of Britain's position within world geopolitics, 1943-1950. It reflects the change of the Anglo-US relationship from equality to dependence, and demonstrates Britain's changing association with its colonies and with the other European imperial spheres within Southeast Asia.

'This book offers a comprehensive new look at an important and neglected part of Churchill's wartime premiership and throws fresh light on the decline of the British Empire in the Far East.' - John Charmley, author of Churchill's Grand Alliance: the Anglo-American Special Relationship, 1940-1957

'T.O. Smith's book opens a window onto the complex international politics of Southeast Asia in the immediate post-war period as the Vietnamese struggle for independence intensified. Focusing on British military, political and economic involvement in the developing contest between Vietnamese nationalism and French imperialism, he highlights Britain's pivotal role in the first phases of the Indo-China War.' - Martin Thomas, Reader in Colonial History, Exeter University, UK

'This major study, based on wide-ranging and meticulous archival research, is a very welcome addition to the literature. It sheds important light not only on the origins of the Vietnam War, but also on Britain's regional and imperial interests in Southeast Asia, Anglo-French relations during a delicate period of post-war readjustment, and the evolving 'Special Relationship' between Britain and the United States. It will certainly be of interest to British historians, and to historians of international relations, Asian history and European decolonization.' - Larry Butler, author of Britain and Empire: Adjusting to a Post-Imperial Age