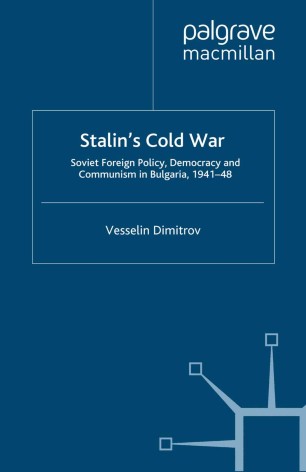 This work offers a major new interpretation of the Stalin's role in the gestation of the Cold War. Based on important new evidence, Dimitrov reveals Stalin's genuine efforts to preserve his World War II alliance with the US and Britain and to encourage a degree of cooperation between communists and democratic parties in Eastern Europe.

VESSELIN DIMITROV is Reader in the Department of Government at the London School of Economics and Political Science, UK.

'This book gives us a textured and incisive analysis of Stalin's policies and actions in Eastern Europe. Using the newest archival materials in Moscow and Sofia, Dimitrov portrays Stalin's ambivalence, equivocation, and inconsistencies as well as his paranoia and brutality. He captures the competing strains of thinking in Moscow and vividly portrays how local dynamics in Bulgaria and the Balkans helped shape the diplomacy of the Great Powers. Stalin had no master plan; his actions were contingent, but they were also determinative. Dimitrov paints a complex and vivid picture of local circumstances that enables us to see why the grand alliance of World War II collapsed. This book is indispensable for understanding the origins of the Cold War and the division of Europe.' - Melvyn P. Leffler, Stettinius Professor of American History, University of Virginia

'This book is a magisterial work of scholarship. Based on a thorough reading of Soviet, Bulgarian and other archives it provides an abundance of new information and intelligent analysis. It shows Stalin's policies in an entirely new light, and at the same time it gives masterly insights into the evolution of politics within Bulgaria. It disposes of old myths that matters evolved in a straight trajectory in the Kremlin or in Bulgaria. This is essential reading for anyone who wishes to understand the post-second world war era.' - Richard J Crampton, formerly Professor of East European History, University of Oxford, and Emeritus of St Edmund Hall, Oxford