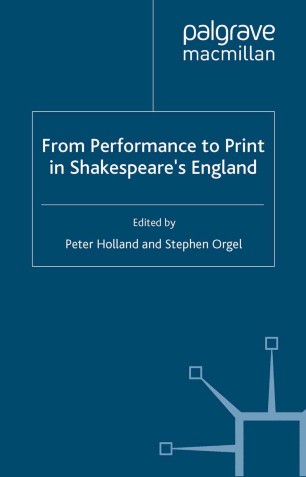 From Performance to Print in Shakespeare’s England

What can the printed texts of plays from Shakespeare's time say about performance? How have printed plays been read and interpreted? This collection of essays considers the evidence of early modern printed plays and their histories of production and reception, examining a wide variety of cases, from early performance to the psychology of Hamlet.

'In this timely volume, a dozen essays illuminate a dozen perspectives on how print culture impinges on the actor's interpretation as much as the critic's. The contributors eclipse the polemic of drama versus theatre - and its two-way bias of literary text versus enlivened social act - to explore the use of texts as scripts, objects, national icons, and records of erasure, all manifestations of issues debated by editors, artists, and readers from the Renaissance to our own time. Challenging the status of a playtext within the history of the book, these essays delve into the idea of texts' corruptibility or completeness in print and performance by identifying how to attend to their materiality, commercial viability, trans-cultural mutability, and epochal interpretive history in the playhouse, bookshop, library, and classroom.' - Tracy C. Davis, Barber Professor of Performing Arts, Northwestern University, USA

'From Performance to Print is a remarkably important book, not only in its reassessment of the historiography of British theatre history, but also as a glimpse into the future of performance-based Shakespearean studies...consists of a dozen engaging, informative, and refreshing essays written by established practitioners of Shakespeare's work. Such is the quality of the contributions that they are all worth praising...' - Natalie Aldred, SHARP News