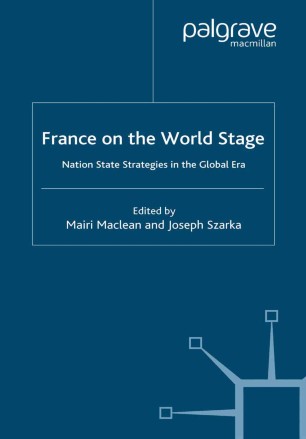 France on the World Stage

This book examines the ways in which France's relations with the international community have evolved in a period of accelerating globalization. It considers the role of the nation state, and its capacity for political initiative, examining French strategies to reinforce French influence on the world stage.

MAIRI MACLEAN is Professor of International Business at Bristol Business School, UWE, UK. She was previously Reader in European Business at Royal Holloway, University of London, UK. Her recent books include Business Elites and Corporate Governance in France and the UK (with Charles Harvey and Jon Press) and Economic Management and French Business from de Gaulle to Chirac.

JOSEPH SZARKA is Reader in European Studies in the Department of European Studies, University of Bath, UK. His research interests are in politics and policy studies, specialising in environmental, economic and energy policy-making. His recent publications include The Shaping of Environmental Policy in France and Wind Power in Europe: Politics, Business and Society.

'This book examines the impact of globalisation on France which, as one of the oldest nation-states, is highly sensitive to its position in the new world order, both resisting it through anti-globalisation movements and ideologies, and looking beyond the nation-state in the European Union. To adapt the words of one commentator, the nation-state is obstinate, and the French nation-state more obstinate than others. This book will be invaluable to students of contemporary France, as well as to students of globalisation processes in today's world.' - David S.Bell, Professor of French Government and Politics, University of Leeds, UK

'Maclean and Szarka have compiled an excellent edition of chapters on a subject of ever-topical interest. Thanks to the contributors' collective breadth of experience and depth of expertise, the book establishes important links between empirical fact and current research agendas in the social sciences, and offers the reader an invaluable assessment of the limits of France's singularity in international relations.' - Dr Helen Drake, Department of Politics, International Relations and European Studies, University of Loughborough, UK

'Maclean and Szarka have brought together an impressive edited collection exploring the key questions and issues confronting corporate France and its political and business leaders in a world where globalisation, environment and security issues dominate the agenda. In a rigorous analysis, the book links the legacy of 'old France' through recent events to rationalise the thinking behind the current strategies France has developed to adapt to this changing world order, particularly in the context of the internationalisation of French business.' - Iain Gray, Chief Executive, Technology Strategy Board, and former General Manager and Managing Director of Airbus UK

'...a very stimulating and invaluable read for anyone interested in contemporary French politics and society, and in the interaction between processes of globalisation and the nation state.' - Nick Parsons, Modern and Contemporary France

'It offers different approaches tackling political, diplomatic, economic, cultural and environmental issues. Consequently, it addresses a wide range of scholars and post-graduates interested in the evolution of France in the twenty-first century.' - Basil Germond, Journal of Contemporary European Studies