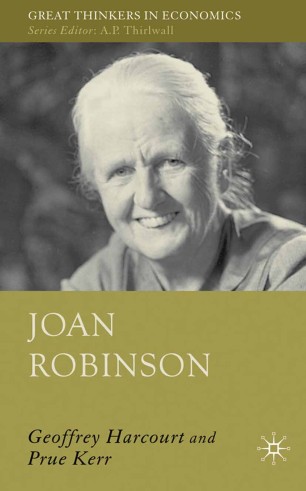 Joan Robinson is widely considered to be amongst the greatest economists of the 20th Century. This book provides a comprehensive study of her life and work, examining her role in the making of The General Theory, her critical interest in Marxian economics, her contributions to Labour Party policy and her writings on development, especially China.


G. C. HARCOURT was born in 1931 in Melbourne, Australia. He is a graduate of the Universities of Melbourne and Cambridge. He has taught mainly at Adelaide and Cambridge Universities, and was a friend and colleague of Joan Robinson for many years. He is co-author and co-editor of 25 books including seven volumes of selected essays and 230 papers in learned journals and edited volumes. His books include Some Cambridge Controversies in the Theory of Capital, Post-Keynesian Essays in Biography, 50 Years a Keynesian and other Essays, Selected Essays on Economic Policy and The Structure of Post-Keynesian Economics.

PRUE KERR was a friend and associate of Joan Robinson in Cambridge. She edited, with Geoffrey Harcourt, the five volume: Joan Robinson: Critical Assessments of Leading Economists. She was supported by the Institute of Advanced Studies at the University of Bologna and the CPEST. She now works on post-Keynesian economic theory.

"Joan Robinson' is a welcome and timely reminder of Robinson's intelligence, energy, passionate commitment to social justice, and tireless capacity for debate. It portrays two voyages of intellectual discovery: the evolution of Robinson's thinking, with a due appreciation for her successes and failures; and Kerr and Harcourt's own measured re-evaluation of the post-Keynesian revolution in which Robinson and they played central roles. The reconsideration of Joan Robinson's life and work is one important starting-point in the broad effort to understand the evolution of twentieth-century economics and to imagine a future for economic analysis outside the narrow confines of neoliberal dogma." - Duncan K. Foley, Leo Model Professor, New School for Social Research, External Professor, Santa Fe Institute, US.

'[The authors'] credentials are impeccable, their command of the subject matter impressive [...] they are to be congratulated for giving an enthusiastic but balanced, approving but not uncritical assessment of Joan Robinson's intellectual achievements.' - Maria Cristina Marcuzzo, History of Economic Ideas