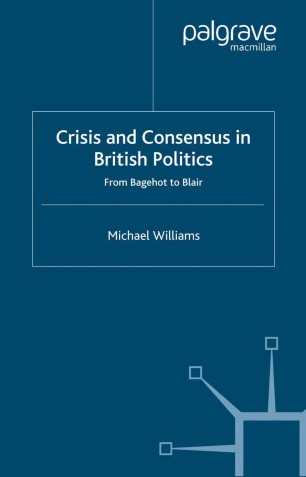 Crisis and Consensus in British Politics

From Bagehot to Blair

Crisis and Consensus in British Politics focuses on the collapse of the post-war consensus in the mid 1970s crisis and the emergence of a new consensus in the 1990s. It follows this process through six key policy areas including civil service reform, privatisation, macro-economic management and relations with Europe. It is designed for students following courses in modern history, politics and public policy as well as general readers with an interest in current affairs.

MICHAEL WILLIAMS has lectured in Politics and Public Policy at the University of Hertfordshire and other institutions including De Montfort University since 1995. Before then he spent twenty years as a civil servant in what is now the Department of the Environment, Transport and the Regions. He has published papers on privatisation and the role of management consultants in shaping public policy. Most recently he helped to edit a collection of essays on the political legacy of the 1960s entitled New Left, New Right and Beyond (1999), to which he contributed an essay on Eric Hobsbawm and Robert Skidelsky as historians and political intellectuals.