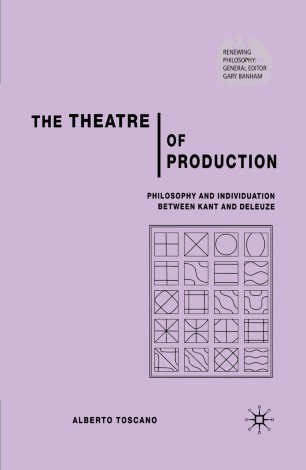 The Theatre of Production

Philosophy and Individuation between Kant and Deleuze

ALBERTO TOSCANO is a lecturer in sociology and a member of the Centre for the Study of Invention and Social Process at Goldsmiths College. He is the author of articles on Schelling, Simondon and Badiou, as well as the co-editor of Alain Badiou's Theoretical Writings and On Beckett. His current research focuses on the link between contemporary ontology and the idea of communism.

'Toscano's exploration of the 'ontology of anomalous individuation' marks a new departure in the field of bio-philosophy at the same time as it recasts the image of post-Kantian philosophy. In a series of elegant and insightful readings, Toscano traces the disruptive effect of anomalous individuation on attempts to establish regimes of representative thought in philosophy and biology. With its historical erudition and its original insight into the relationship between ontology, ethics and the philosophy of life, Toscano's book is an outstanding performance that will set new standards for debate in its field.' - Howard Caygill, Professor of Cultural History, Goldsmiths College, UK

'This is a very important and ambitious book. Marshalling an impressive history of modern and contemporary philosophy (between Kant and Simondon), and using the question of individuation as its guiding thread, it reproblematizes Deleuzean ontology and its bio-constructivist project. Toscano offers us an essential contribution to the debate over contemporary materialism in European philosophy, such as it is dramatised today between Deleuze and Badiou. A rare experience of intellectual delight and a real companion to thought. Towards a new Deleuze?' - Eric Alliez, Senior Research Fellow in Modern European Philosophy, Middlesex University, UK

'I cannot recommend this book highly enough for those interested in the question of individuation, more generally the problem of nature itself, and the continuing debates surrounding the philosophy of Deleuze.' - Anthony Paul Smith, Journal of Cultural and Relgious Theory