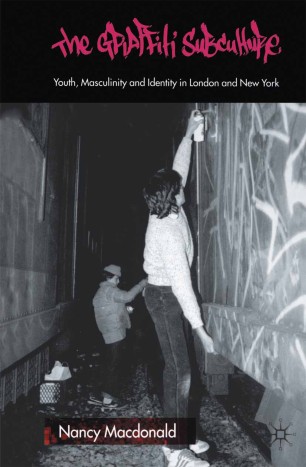 Youth, Masculinity and Identity in London and New York

This book is the most extensive contribution to our understanding of the graffiti subculture to date. Using insights from ethnographic research conducted in London and New York, the author explores the varying ways young men use graffiti to construct masculinity, claim power and establish independence from the institutions which define and often limit them as young people. Forging a link between subcultural practice and identity construction, this book will be essential reading for anyone interested in new understandings of youth and their subcultures.

NANCY MACDONALD has lived and worked in London and New York. She currently resides in London where she works as a youth consultant in a brand development company. This book is based on her PhD thesis which she completed at Brunel University.

'By demonstrating the importance of gender in the formation and dynamics of youth subcultures, this book represents a challenge to the canon of subcultural theory. A thoughtful and insightful contribution which deserves to become an important text in (sub)cultural studies.' - Rosalind Gill, Lecturer in Gender Studies, London School of Economics and Political Science

'Macdonald has gone to the heart of the graffiti writers' world and brought to bear the most thorough and provocative research. Her success depends, in part, on her forthrightness, her refusal to condescend and her respect for the writers' enterprise and voice. Her informants are heard loud and clear giving this book an authentic tone that stays in tune with the language of the streets. Macdonald maps out this, largely male, rite of passage and presents adolescence as a period between two worlds: literally in the subway tunnels, figuratively in the subcultural underground. Her candid and often humorous description of the fieldwork process, her unusual perspective as a woman observing men and her well documented conclusions make this book essential reading in the fields of anthropology, sociology and juvenile justice and a very enjoyable read for anyone else interested in art, youth and human nature.' - Henry Chalfant, author of Subway Art

'Subcultures may come and go, but graffiti has stuck around with no sell-by date in sight. In its lifecourse it has rarely been subjected to an analysis that is not only academically persuasive, but also wrapped in the walking, talking, painting actions of graffiti coda. This book offers a fascinating portal into the mind of the graffiti writer.' - Ephraim Webber, Editor of Graphotism Magazine

'One of the strengths of the book comes from the fact that she infiltrated the male-dominated graf world and managed to gain the trust of writers in London and New York. Extracts from her interviews with them pepper the text and, most interestingly, she ends the book with a series of written communications from some of these writers, to whom she had sent copies of the manuscript requesting feedback.' - The Guardian