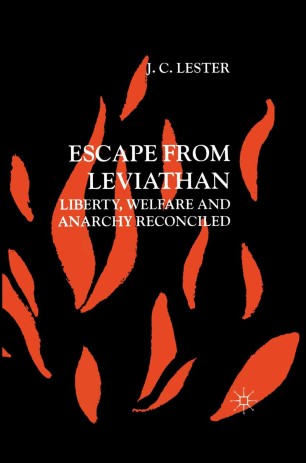 The principal criticism of libertarianism is that it would damage human welfare. In response, this book considers an extreme libertarian thesis: there is no conceptual or practical clash among the most plausible accounts of economic rationality, interpersonal liberty, human welfare, and private-property anarchy. Eschewing moral advocacy as a distraction, it offers a critical-rationalist defence of this objective thesis from many criticisms in the literature.

J.C. Lester has been published in various scholarly periodicals and books. He has taught at several university institutions, including the London School of Economics.

'Lester's book develops a sustained and at times fresh and surprising argument for its compatibilist conclusions. It constitutes a formidable intellectual challenge to the social democratic establishment in Political theory.' Professor Antony Flew

'Lester argues that utility is compatible with liberty, understood in its classically 'negative' sense. In the process, he has written a remarkable book, informed by a masterly knowledge of economics and filled with careful analytical detail. He deals with a vast range of criticisms, and in the process undoes a great deal of theoretical mischief on the relations between these important concepts, including much by philosophers of major reputation. His accounts of instrumental rationality, of property rights, of public goods problems, and of restitution for criminal cases, are important contributions and will be discussed with interest for long. Few among us will fail to benefit from reading it.' - Professor Jan Narveson

J.C. Lester has written an outstanding book...he tackles the subject with the consummate skill of an expert in the field...his critique of democracy was a heady, almost intoxicating, refutation...Lester shows considerable originality...He is able to use the concepts and intellectual weaponry of libertarianism as effectively as the giants of the subject - Rothbard, David Friedman and the early Nozick included...rarely has capitalism been justified with such philosophical expertise...In a short review article it is impossible to do justice to Lester's remarkable book. He manages to say new and exciting things about criminal justice...new ways of internalizing externalities, and property rights solutions to the 'tragedy of the commons'...Lester's arguments are presented with sophistication and are informed by an impressive mastery of the secondary literature.' - Norman Barry, Professor of Social and Political Theory, University of Buckingham

'This is a notably ambitious reconstruction of radical libertarian thinking from the ground up. Even those, like myself, who are unpersuaded by its reformulation of classical liberalism will benefit from reading Lester's book.' - Professor John Gray, Professor of European Thought, London School of Economics and Political Science, University of London

'Lester's book develops a sustained and at times fresh and surprising argument for its compatibilist conclusions. It constitutes a formidable intellectual challenge to the social democratic establishment in Political theory.' - Professor Antony Flew, Emeritus Professor of Philosophy, University of Reading