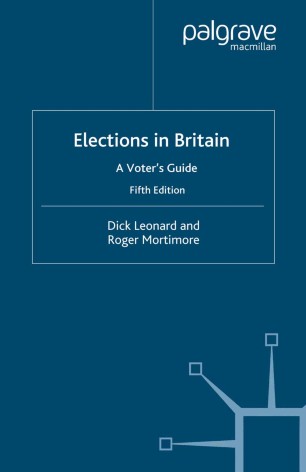 How do British elections work? What about local elections and by-elections? How are candidates chosen? What has been the impact of changes introduced by the present government? How can an ordinary voter play his or her part? And why do so few people vote these days? Dick Leonard, a political journalist and former MP, and Roger Mortimore, an opinion pollster, cover all aspects of British elections in this updated edition of the standard work, including comprehensive tables of statistics and results.

Author Dick Leonard: Dick Leonard is an historian, journalist and author and a former Labour MP. For many years he was Assistant Editor of The Economist, and headed their office in Brussels, where he was later also correspondent of The Observer. He also worked for the BBC, and contributed regularly to leading newspapers across the world. His publications include The Economist Guide to the European Union, Elections in Britain, A Century of Premiers: Salisbury to Blair; Nineteenth Century British Premiers: Pitt to Rosebery and Eighteenth Century British Premiers: Walpole to the Younger Pitt.

'...first sighting of Dick Leonard's Elections in Britain - A Voter's Guide is a sure-fire sign that the UK general election season has finally arrived.' - John Palmer, The Bulletin

'the nuts and bolts of the general election' - Gillian Peele, Times Educational Supplement

'Describes in useful detail how the British electoral system works.' - The Economist

'indispensable reading for all ...a host of facts, figures and anecdotes which turn the sometimes dry and dusty material of the psephologist into fascinating reading...' - John Palmer, The Bulletin

'The most useful election books are those which chart the nuts and bolts of the electoral process. The seventh edition of Elections in Britain: A Voter's Guide... is a straightforward factual account of how the British electoral system works. It deals with the rules and administrative arrangements, the casting and counting of ballots and how votes translate into seats, as well as the conduct and financing of the campaign itself.' - The Economist