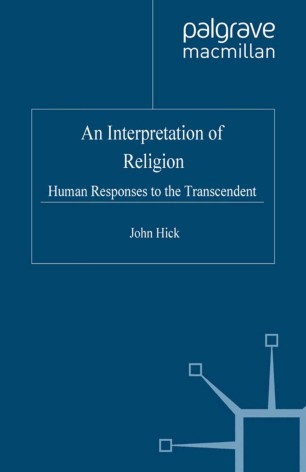 An Interpretation of Religion

Human Responses to the Transcendent

An updated new edition of the groundbreaking investigation which takes full account of the finding of the social and historical sciences whilst offering a religious interpretation of the religions as different culturally conditioned responses to a transcendent Divine Reality. Written with great clarity and force, and with a wealth of fresh insights, this major work (based on the author's Gifford Lectures of 1896-7) treats the principal topics in the philosophy of religion and establishes both a basis for religious affirmation today and a framework for the developing world-wide inter-faith dialogue. Includes a new Introduction to the second edition.

'A movement has been growing among Christians, gaining of late in numbers and strength, to appreciate the faith of other religious groups, recognizing the spiritual depth and the divine grace made available through other traditions as through the Christian. Lacking until now, however, has been a philosophically sophisticated statement of the position. Here it is. The rest of us cannot but be grateful.' - Professor Emeritus Wilfred Cantwell Smith, Harvard University

'The description of Buddhism in this book is excellent and trustworthy.' - Yoshinori Takeuchi, Kyoto University

'This book will certainly help to initiate a new thinking and to open a new intellectual space for a radical reappraisal of the religious dimension of human existence.' - Professor Muhammad Arkoun, Sorbonne

'A major breakthrough in the understanding of the world's traditions and should be read by the adherents of all faiths.' - Rabbi Prof. Dan Cohn-Sherbok, University of Wales

'This book strengthens Hick's position as one of the most significant thinkers in the second half of the twentieth century...It has the patina of decades of careful scholarly reflection...It is Hick's most comprehensive, bold, and challenging work' - Chester Gillis, Journal of Religion

'A leader in interfaith interpretation of religion, Hick has written what will probably become a classic in the philosophy of religion'- Library Journal

'It is a masterpiece, destined to be a (if not the) classic of its type. . Hick sets a standard in philosophy of religion few can hope to match. Generally accessible to advanced undergraduates, yet nuanced enough for scholars, it will remain required reading for a long time' - Theological Studies

'Hick has drawn together his many provocative insights into a masterful summary statement.' - Peter Hodgson, Religious Studies Review

'This book is a unique contribution to the development of a field theory of religion. It justifies religious belief on the basis of our experience, especially religious experience, and points out the existence of resources within the major world religions to resolve the contemporary urgent problems of religious pluralism. The author's new attempt is very valuable for all world religions including Buddhism.' - Masao Abe, Pacific School of Religion California

'An Interpretation of Religion is distinguished by its breadth and erudition and by its author's willingness to examine religion as across?cultural phenomenon.' - Garrett Green, Theology Today

'The most persuasive philosophical advocacy for religious pluralism ever written. John Hick's knowledge of the various models of religion is massive and impressive. Perhaps most modern philosophers of religion would consider him the authority in the field.' - Yandall Woodfin, Southwestern Journal of Theology

'A masterful survey of world religions...Writing from a Christian point of view, Hick is sympathetic toward other world religions and clearly argues for the validity of a faith response. The book is highly recommended for college and seminary libraries as well as for public libraries seeking to expand resources for readers interested in religion on a world scale.' - Choice

'[This work] evinces Hick's many virtues: ingenuity; fairness toward all arguments; deference to the standards of analytic philosophy; familiarity with Eastern as well as Western religions; and, not least, a clean, clear prose.' - Rogert A. Segal, Christian Century

'Hick's Interpretation of Religion offers an appealingly simple and comprehensive argument for world ecumenism...The argument for the pluralistic hypothesis is lucidly presented, while it controls a broad range of materials and uses simple language that should appeal to nonphilosophically trained readers.' - Ellen T. Charry, Journal of Ecumenical Studies