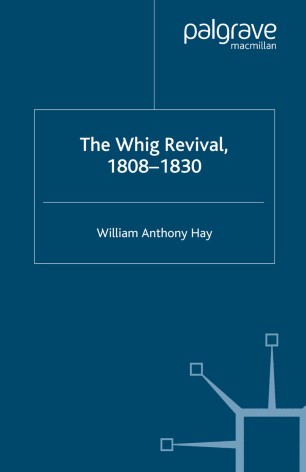 Between 1808 and 1830, the Whigs made a remarkable transition from opposition to office that highlights important trends in early Nineteenth-Century Britain. The Whig Revival examines how a coalition between provincial interest groups and the parliamentary party established them as a viable governing party by 1830. Where earlier studies have focused on the Whigs experience in government or liberal reform movements, this work examines their years in opposition and how the struggle for power broadened the political nation beyond metropolitan elites.

WILLIAM HAY is Assistant Professor of History at Mississippi State University and a Senior Fellow with the Foreign Policy Research Institute. He has published on British history and international relations in journals including Diplomacy & Statecraft, Albion, and Orbis: A Journal of World Affairs.

'An incisive analysis of British political culture in the early nineteenth century that throws much light on the transformation from ancient régime to liberal Britain. Skillfully linking political ideas and practices, Hay's work is of major importance for our understanding of the nineteenth century political world in Britain.' - Professor Jeremy Black, University of Exeter

'The Whig Party in the first three decades of the Nineteenth Century is a topic that has long cried out for a serious reappraisal...Now at last Hay has come to their rescue in a fine new history that fully appreciates their importance.' - Richard W. Davis, Emeritus Professor of History, Washington University in St. Louis