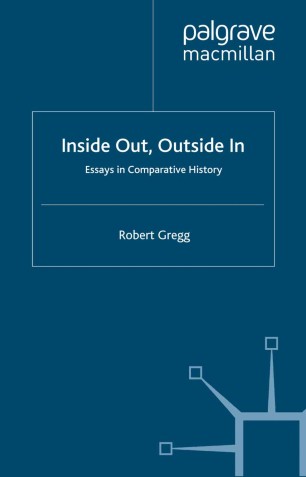 Inside Out, Outside In

Inside Out, Outside In takes familiar historical narratives and provides alternative readings for them. It endeavours to expand the parameters of comparative history by focusing on the economic, social, political and historiographical connections among societies, and by observing these intertwined histories from different vantage points. Iconoclastic, provocative, even quirky, Inside Out, Outside In takes us beyond culture and society into the imperial webs of association found inside and outside the discipline of history.

Robert Gregg is Assistant Professor of History at The Richard Stockton College of New Jersey.

'In this far-ranging, irreverent and ultimately utopian study, Robert Gregg artfully proves that comparative history need not be two-dimensional - that it can and indeed must turn on several critical axes simultaneously, in part because the messiness of history as it plays itself out on a diversity of terrains requires a more resolutely anti-national approach than has heretofore been imagined. Inside Out, Outside In is a real romp through an impressive variety of literatures and historiographies which will have appeal to the generalist and specialist alike, precisely because it presumes readers are capable of appreciating the 'miscegenation of narratives' that the best kind of history-writing represents. Above all, Gregg's insistence that modern and even 'postcolonial' historiography is deeply implicated in national and imperial histories leads him beyond a facile rejection of foundationalism, opening up the possibility of new, more politically accountable practices among professional historians.' - Anntoinette Burton, Associate Professor, Department of History, University of Illinois