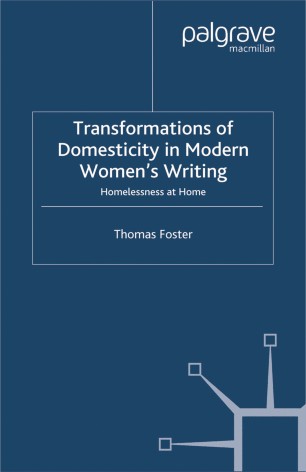 Transformations of Domesticity in Modern Women's Writing makes new connections between feminist criticism of domestic ideology in the nineteenth century, modernist women's experiments with literary form, contemporary feminist debates about the politics of location, and postmodern theories of social space. The book identifies a coherent transition of women's writing that transforms domestic ideologies of 'woman's place' by redefining the ideas about space that underlie that ideology. The result is to open the space of gender identity to new relations of class and race.

THOMAS FOSTER is Associate Professor of English at Indiana University, Bloomington, USA. He has published articles on a wide variety of topics in journals such as Modern Fiction Studies, Contemporary Literature, Signs and PMLA, and was general editor of Genders from 1994-1998. He has also contributed essays in several book collections.

'Thomas Foster is a cutting edge critic with a unique literary vision that sets feminism, postmodernism, and Marxism to work on texts familiar and unfamiliar, in brilliant, and deeply historical, new readings. This book is a major landmark in cultural studies.' - Jane Marcus, Distinguished Professor of English, CUNY Graduate Centre, and City College of New York

'Foster's ambitious survey of ten modernist women writers demonstrates, with quiet brilliance, the creative and canny ways women have been renovating the ideology of home since at least as early as Dickinson - A serious, shrewd, and substantial book'. - Diana Fuss, Princeton University

'In Transformations of Domesticity in Modern Women's Writing, Thomas Foster explores the double standpoint from which the writers he analyzes produce their work. He redefines the 'domestic' sphere as a space that is at once within the home yet outside the conditions whereby the writers that he analyzes might be described as 'belonging' there. Foster works at the cutting edge of women's studies, queer theory, gender studies and cultural studies and he adds an important critical standpoint to each of the locations he inhabits'. - Donald E. Pease, Avalon Chair of the Humanities, Dartmouth College

'Raising the critical conversation on separate spheres to a brilliant theoretical pitch, Transformations of Domesticity in Modern Women's Writing revises our understanding of the complex inheritance of publicity and domesticity for modern women writers. Foster's erudite readings make the most of contemporary feminist discourses while illuminating the specificity of the modern period.' - Robyn Wiegman, Duke University