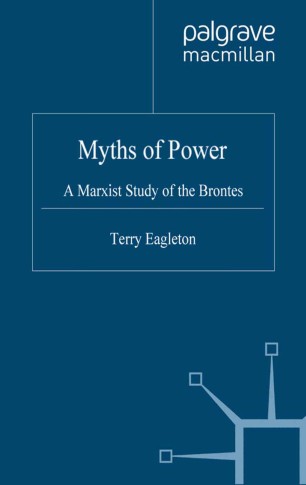 A Marxist Study of the Brontës

Myths of Power - Anniversary Edition sets out to interpret the fiction of the Brontë sisters in light of a Marxist analysis of the historical conditions in which it was produced. Its aim is not merely to relate literary facts, but by a close critical examination of the novels, to find in them a significant structure of ideas and values which related to the Brontës' ambiguous situation within the class-system of their society. Its intention is to forge close relations between the novels, nineteenth-century ideology, and historical forces, in order to illuminate the novels themselves in a radically new perspective. When originally published in 1975 (second edition in 1988), it was the first full-length Marxist study of the Brontës and is now reissued to celebrate 30 years since its first publication. It includes a new Introduction by Terry Eagleton which reflects on the changes which have happened in Marxist literary criticism since 1988, and situates this reissue of the second edition in current debates.

'...a valuable book for anyone wanting to move beyond critical pieties to an understanding of the relation between the Brontës' work and their society. Dr Eagleton asks questions which ought be asked.' - Juliet Dusinberre, Notes and Queries

'...this is a book of real stature, of cogent and steely argument and analysis...'

'The increased prominence of largely forgotten texts by women writers, working-class writers or black writers, in part came from work undertaken by Eagleton. 'But, interestingly, Terry himself hasn't really gone down that route,' says Widdowson. 'His criticism had been largely based on canonical authors, but his approach to Hardy or Lawrence or the Brontës - dealt with in the light of new theories - suggested new ways of looking at canonical texts, which have been followed through by other people. For instance, he'll take marginalized figures from books, push them to the foreground and re-shape the way in which we look at them. He takes very familiar texts and roughs them up. He calls it 'reading against the grain'. ' - Peter Widdowson, The Guardian

'He has written wonderfully on the likes of Tennyson, Hardy, Dickens and the Brontës. He has taken the best of that old Cambridge tradition of close reading of the text, but made it socially and politically relevant. I saw him lecture on Wuthering Heights and he was very much on the side of Heathcliff. But mostly he showed that you could take a text that a whole generation of critics had abstracted from the social history of which it was part, and talk about it in terms of the tensions and conflicts which were still going on in the 1970s.' - Stephen Reagan, The Guardian, 2002