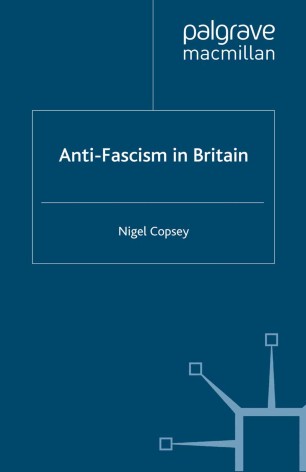 In comparison to British fascism, anti-fascism is uncharted territory. This book seeks to redress the balance of existing literature which tends towards a narrow focus on the protagonists of fascism rather than opponents. Anti-fascism in Britain defines anti-fascism in broad terms and offers both a comprehensive and absorbing historical overview that begins with opposition to the precursors of Oswald Mosley's British Union of Fascists in the 1920s and ends with anti-fascism in the present day.

Nigel Copsey is Lecturer in History at the University of Teesside.

'This excellent and well-written book fills a much-needed gap, being the first full-length academic study of an important phenomenon in recent British political history. By emphasising the two traditions of anti-fascism in British society Nigel Copsey has shown the significance of his subject; not only could the direct action favoured by militant anti-fascists bring far more supporters onto the streets than their fascist opponents but 'passive' anti-fascism became a defining aspect of British national culture after the second world war. While the state authorities held the ring between fascists and anti-fascists, public order was maintained with care taken to minimise the loss of civil liberties, even if this meant giving fascists continued licence to criticise immigrant groups and British Jews, provided they were not too abusive.' - Richard C. Thurlow, Department of History, University of Sheffield

'There is a great deal to interest and stimulate students of fascism and the Left in this book.' - Martin Pugh, Times Literary Supplement