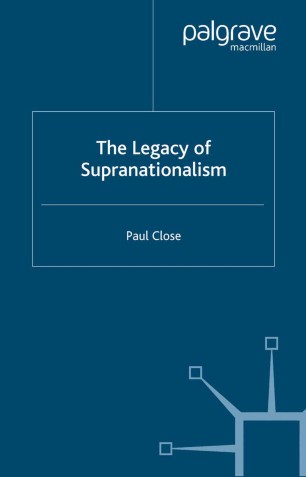 The Legacy of Supranationalism

The doctrine of supranationalism has been most evident in Europe, but has become increasingly a global tour de force . Supranationalism is the ideological driving force behind the process of European integration and so the European Union, the first supranational regional regime (SRR). But the same doctrine has bequeathed other gifts to the world and to posterity. The EU is evolving as a prominent global player, and as a result appears to have become an inspiration and model for the proliferation of other SRRs and proto-SRRs. However, as SRRs acquire greater power relative to 'traditional' global players such as nation-states, a further state of development has ensued, entailing the creation of supranational global regimes (SGRs), signalled by the progress of the United Nations and the World Trade Organisation.

PAUL CLOSE is Senior Lecturer in European Policy at Leeds Metropolitan University. Dr Close's publications include: (editor with R. Collins) Family and Economy in Modern Society; Family Divisions and Inequalities in Modern Society; The State and Caring; Citizenship, Europe and Change; and (with E.Ohki-Close) Supranationalism in the New World Order: Global Processes Reviewed.