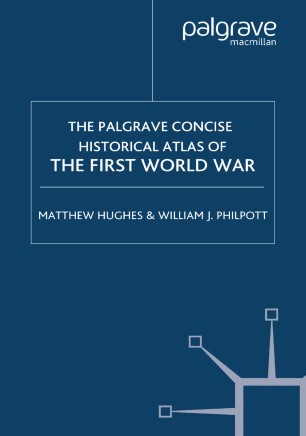 The Palgrave Concise Historical Atlas of the First World War

The First World War continues to fascinate. Its profound effect on politics and society is still felt today. Yet it remains a greatly misunderstood conflict, shrouded in myths and misperceptions. In The Palgrave Concise Historical Atlas of the First World War Philpott and Hughes, leading young historians of the conflict, draw on recent scholarship to present a clear introduction to the war. In fifty maps, accompanied by supporting text and statistical tables, they survey the main battles and political features of the war. This concise volume will give students and general readers important insights into the nature and effects of world war.

MATTHEW HUGHES is Senior Lecturer in Military and International History at the University of Salford, where he directs the BA degree in Military History. A specialist on the war in the Middle East, he is the author of a book on the Palestine campaign, Allenby and British Strategy in the Middle East, 1917-1919, published by Frank Cass in 1999.

WILLIAM J. PHILPOTT is Lecturer in Military History in the Department of War Studies at King's College London. He is a specialist in the operations on the Western front and has published extensively in that area. His first book, Anglo-French Relations and Strategy on the Western Front, was published by Macmillan in 1996. He is now editor of the Palgrave Macmillan series, Studies in Military and Strategic History.